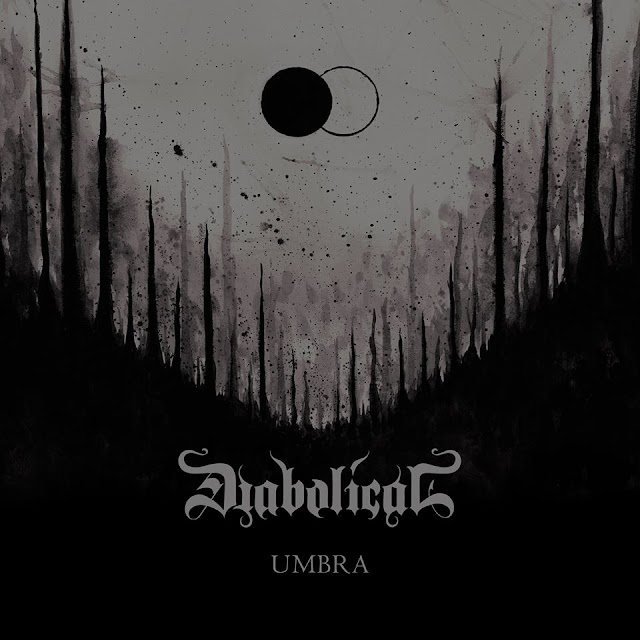 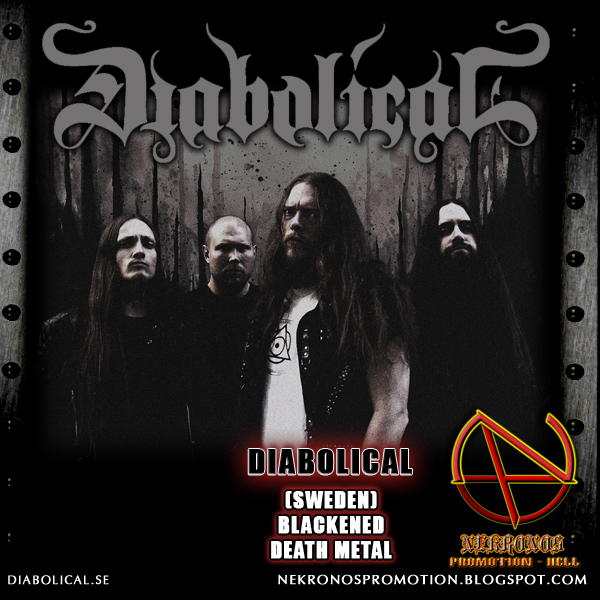 * "The umbra, penumbra and antumbra are three distinct parts of a shadow, created by any light source after impinging on an opaque object. For a point source only the umbra is cast.
These names are most often used for the shadows cast by celestial bodies, though they are sometimes used to describe levels of darkness, such as in sunspots." - Umbra, penumbra and antumbra

From the darkest majestic lands of Sweden come the constantly progressing blackened death metal warriors Diabolical, a conquering band formed in Sundsvall back in 1996! Since then Diabolical defiant musicians kept on refusing to do the expected!
The band returns now with an absolutely outstanding EP by the title of "Umbra", a natural follow up to the critic acclaimed predecessor "Neogenesis", an album that in our opinion was without a doubt the best of the year 2013!
With this new release the band gives another step forwards in their career, this is in our opinion the bands most mature, deep dark and intense sound to the date! With this revolutionary sound the band takes their post-apocalyptical concept into an absolute new level!

"Umbra" brand new EP has without any doubts the most elaborate sound created by Diabolical to the date! In this new chapter the band steps forwards into fields of majestic darkness with 4 newly crafted tracks full of innovative and inventive extreme music, all of this with a constant renewed own identity, an identity that assumes many forms but hardly the most expected ones, impressing their listeners with powerful melodies, delicate ethereal hymns and archaic darkness! A constant eerie vibe embraces each Diabolical creation, a seal of colossal identity and quality!
"Requiem" introduces the listeners into this masterpiece with a bone-crushing heavy track containing a very own cold dark touch of enchanting darkness, here the clean vocal choirs give an even deeper enchanting aura to the already ethereal sound! "Diaspora" takes you forwards through this darkly intense death metal piece of art! This is a quite dynamic strong track, where slower and doleful parts combine in perfection with faster doom daring creations! Consumed by "Diaspora" black flames of horror we move forwards into "Tremor", an absolute new experience to Diabolical listeners, containing spoken excerpts from the late Jiddu Krishnamurti‘s "Talks on Fear", this slower, yet intense track takes you into a eerie melancholic journey, inciting you to close your eyes and transcend, meditate through a dark celestial plenitude! This track easily detaches from all the others I heard of Diabolical before, a bright new experience for all the listeners!
To end this majestic EP we have the track "Decline", a defying and ultimate barbaric assault into the listener’s ears, this is another fantastic strong track with an outstanding unearthly guitar solo.
The dynamism of Diabolical musical metamorphosis is impressive to say the least, the top-notch variations from dark slower to heart-ripping fast melodies are on the edge of what is being done these days on extreme metal camp!

The top quality of this "Umbra" EP is undeniable! The sound created at Wing Studios in Stockolm by vocalist Sverker Widgren is simply outstanding!
Now as a four piece, the extreme metal riders of the Apocalypse Sverker, Carl, Dan and Pär have proved to be one of the best emerging bands on the extreme metal scene; their constantly evolving music is indeed quite in front of what is being done in a already saturated metal genre!
Diabolical musician’s talent and geniality is undeniable, not only musically but also artistically, worthy to be mentioned, the EP cover art is another conception of the main lyricist Carl Stjärnlöv (guitarist) creative mind!
This quality and "know-how" has allowed the band to be part of several significant tours like the latest European ones with bands like Borknagar and Kampfar!
If you are into bands like Dimmu Borgir, Behemoth, Borknagar, Fleshgod Apocalypse, Septic Flesh then you will find this EP to be a must in extreme metal collection!

All in all, "Umbra" is a blackened death metal journey across deep dark shadows of phantasmagorical splendour! Profound and eerie enchantment shall lead your path through this post-apocalyptical sterile land of human decadent awareness and spiritual renewal!
Diabolical undeniable quality and ever-growing extreme metal structures set higher and higher the boundaries of extreme metal itself! Ear-catching and addictive, "Umbra" is in our opinion one of the best pieces of metal for this year and most probably the best EP of the year 2016! Be sure to get a copy of this outstanding piece of extreme metal art!

Posted by NeKronos Promotion Hell at 05:59