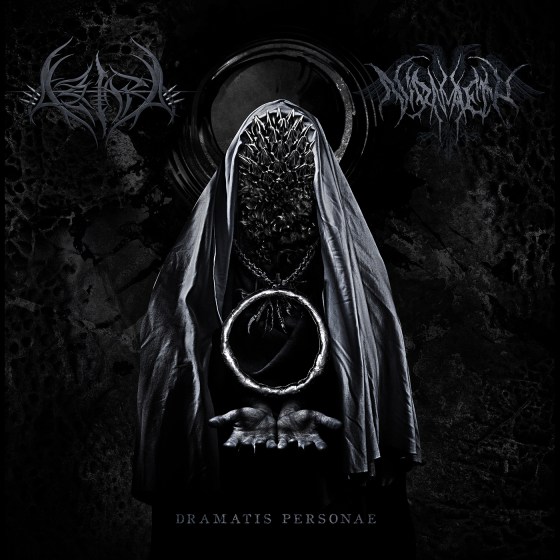 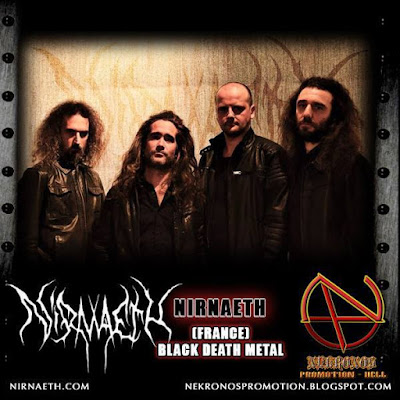 France is no stranger to black metal and to reinforce that two well-known underground scene names unite for a wrathful invocation of the dark lords of war and destruction!
Right out from the black metal crypts the bands Nirnaeth and Azziard (with members of The Negation, Moonreich, Whispering Tears...) combined their unholy forces and recorded this "Dramatis Personae" split album for the French label Kaotoxin!

This split is composed sadly just by two tracks, one from each band. This makes you even more eager for the bands full length releases to come! The wait will be tormenting for the darkly teased ears!
"Dramatis Personae" shall please the fans of black metal with a tortuous death metal twist into, all of this with the right proportions, providing in this way all the right dose of brutality blended with the natural essence of black metal... the untamed darkest sounds from hell itself!

Must say that both of the bands have similar sound, forging a dynamic form of black death metal that will probably please adepts of bands such as Tjuder, Marduk, Watain, Deströyer 666 etc.
While the music of Azziard clearly reveals their addition for "World Wars" using as their trademark "War Metal" that defines quite well their produced destructive sound, in the other hand Nirnaeth unleash their traditional / orthodox black death metal with a slight "thrashier" musical edge sharpness!
Personally this is the kind of extreme metal I never get bored to listen to, this dynamism is essential to avoid the raw monotony of the black metal genre!

The tracks "Unus Mundus"(Azziard) and "Nihil in Me"(Nirnaeth) haven't been released before, so this is the chance to check in first hand this hate filled dark pieces of anti-life manifesto! Hymns to War and Blasphemy unleashed upon this underground metal universe!

Both songs production on Vamacara Studio (Otargos, Flayed, Antropofago...) for Azziard, Midnight Studio (Gronibard) and HHStudio (Yhdarl, Sources of I, Miserable Failure...) for Nirnaeth are a perfect fit to the bands darkest warfare sound!
Before ending, I still need to mention the smashing art full of symbolism and a blaspheme dark aura done by Above Chaos(Tjuder, Inquisition, Kampfar...).

In all "Dramatis Personae" is a great split release from two great French underground black death metal bands emerging from a blood-soaked unholy war ground. This is a great piece for adepts of Metal darkest formula under the sign of the black mark! Darkly obscure but still brutal as Hell!

Posted by NeKronos Promotion Hell at 06:47