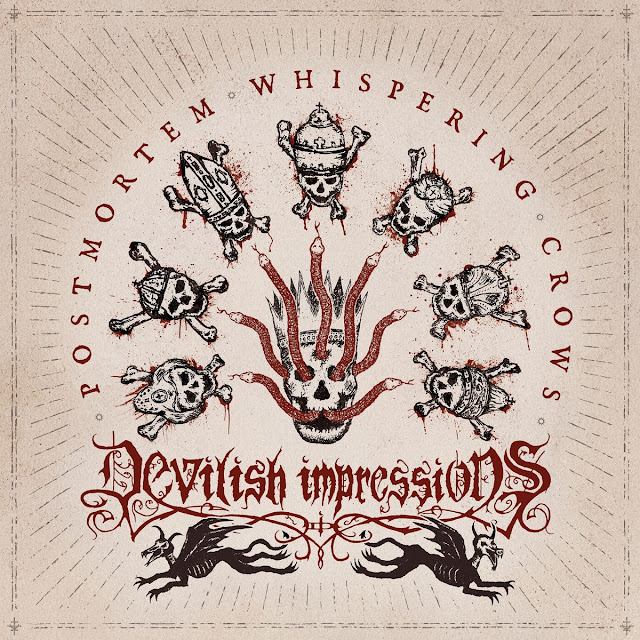 PRODUCTION/RECORDING:
Music written and arranged by Quazarre
Lyrics by Konrad ‘Darky’ Nawojczyk and Quazarre, except where mentioned
Drums and percussion arranged by Icanraz
Produced, mixed and mastered by Przemysław Nowak at
Impressive-Art Studio
Co-produced by Quazarre and Devilish Impressions 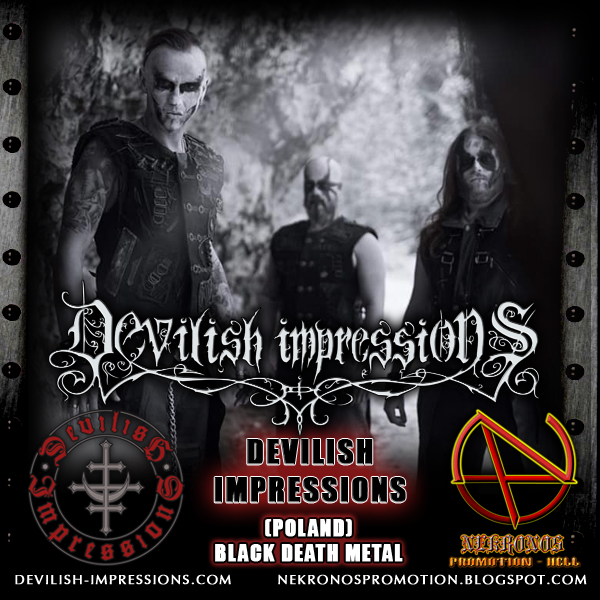 
THE BAND AND THE NEW ALBUM:

Melodic Black Death mavericks Devilish Impressions are back with an intense new EP entitled "Postmortem Whispering Crows", a natural follow up to the bands 4th full-length work "The I", an album that received great critics both by fans and by the media in general. It was said to be the bands darkest, heaviest and most intriguing work to date. Once you elevate the standards so high you need to fulfil your demands, so it was time for Devilish Impressions to deliver a new enriching epic extreme metal musical experience... rawer, darker and even more savagely gruesome!

The band has been formed back in the year 2000 in Poland and ever since haven't stop improving and reinventing their sound, refusing to do what is expected, the band has always managed to bring something new and remarkably fresh on each new release. "Postmortem Whispering Crows" is no different, deeper into a decadent world of chaos the order comes from the arts who elevate the highest human values, in this dark twisted world emerges the new opus, dark, sickening, cruel but yet with such clearer message towards it's listeners who are teased into action, towards the liberation of their minds and spirit, away from any form of blinding light so empty and vain!

Devilish Impressions have paved their way into extreme metal acknowledgement, step by step with notorious talent and diabolical geniality, their constant sound evolution is a proof of that. This has caught peoples attention and has allowed the band to tour over Poland and Europe several times and even through China. The band has toured together with bands such as Aeternus, Hate, Behemoth, Dismember, Marduk, to mention few!

The emissaries of the devil are restless but sadly still so underrated once compared to other bands who quickly achieved the elite status and had the fortune to rise to the tops... but yet, the lesser exposed the more you will need to dig to discover, as we all often say... the deeper you dig the better are your chances to find things of unique value and rarity, with Devilish Impressions I think it's all about that, once you listen to their sophisticated and complex black death metal you will know the proportion of the musical treasure you have just found... a black pearl among the extreme metal seas! You will not be disappointed if you are seeking for allot more than what extreme metal is feeding to the masses this days... a rare case of musical geniality and craftsmanship!

The production of the EP done over Impressive-Art Studio makes the sounds become much alive and organic, never over-polished, so that in this way it conserves the rawer, almost savage vibe that the Devilish Impressions actual sound requests, I think it couldn't be in any other way!
The album art was done once again by the Infected Minds, the result is a minimalistic but direct art attached to the whole EP concept, straight to the point and enriching this elegant digipack edition with some old fashioned rebellious medieval-like art!

TRACK-BY-TRACK:
"Postmortem Whispering Crows" is around 16 minutes of length and in no way we should dare to say that this might only be leftovers from the previous full-length ("The I") as the quality of this 3 songs speak for themselves, the elite level of the songs as well as the sound structures elevates this songs to a "must-listen-to" black death metal piece of art! Daring and well balanced Devilish Impressions deviant identity is all but expected, the overall sound experience is slightly bounded to the previous full length but as a step forwards it embraces by itself a new defiant ground of melodious splendour, unchained from unnecessary bounds to any black or death metal correctness. All you shall ear on this opus is a complex extreme metal vision at it's finest expression! A blend of the best extreme metal musical elements unbounded to any creative limitation! So let me tell you more of each track:
"Dvma" track opens the EP and it's inspired on Maria Komornicka (PL) writers work, as always Quazarre (vocals, guitar - only founding member) greatest inspirations have been The Young Poland modernist literature period (1890 to 1918), this movement promoted trends of decadence, neo-romanticism, symbolism, catastrophism and impressionism. Musically speaking this is a strong emotional and melancholic track, a journey across dark realms of decay, Dvma is sung in the bands native language which enhances the whole lyrical meaning and musical diversity, the sombre melodic guitar solo and vocal diversity are high notes on this great track, raising in tension and tremor!
"Cingvlvm Diaboli" follows, this is a defiant track that instigates ones mind to remain active and rebellious in a commonly so called diabolical way, which means, an open mind  fighting against any religious blindfolds who cause human nature castration. Musically speaking this is an aggressive fast track with a very strong heart-pounding melodic structure! A perfect combination of great lyricism and scorching black death metal fire! The incursion of some slightly progressive death metal elements (in the vein of Death) are another interesting detail on this track.
"Interregnvm" finishes this opus between two reigns, of Good and Evil... the eternal dichotomy... King against King, where only One shall prevail! Musically speaking this Luciferian unchained track is in it's essence a raw and savage/barbaric track, but there is no cruelty without it's beauty and Devilish Impressions always find the right way to balance melody with ear-slashing brutality! Here the incursion of intense rock-like guitar solos support the track raising tension towards the very last second of it's length!

THE CONCLUSION:
"Postmortem Whispering Crows" is a short but intense piece of some of the best black death metal we have heard, proving that Devilish Impressions are among the best Polish bands in their genre, even knowing the concurrence is fierce, even more in their homeland, I dare to say that Devilish Impressions clearly detach from the masses as their sound speaks for itself. The new EP is a rawer expression among black death metal art, dark and sinister but yet so full of life and so inspiring towards action. This is in fact a leading band in their genre and this new work brings them even closer to the acknowledgement they sure deserve! The elegance of each creation, the complexity of each musical structure and eloquent lyrical content sure elevate Devilish Impressions as one of the best examples to listen within melodic black death metal art! A true delight to ones ears, making you eager to listen to any further developments that this band shall take in the near future times!
"Postmortem Whispering Crows" is one of those pieces of extreme metal excellence you sure don't want to miss! I am convinced It will leave an (Devilish) Impression on each of its listeners!

Posted by NeKronos Promotion Hell at 01:24