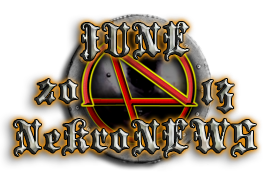 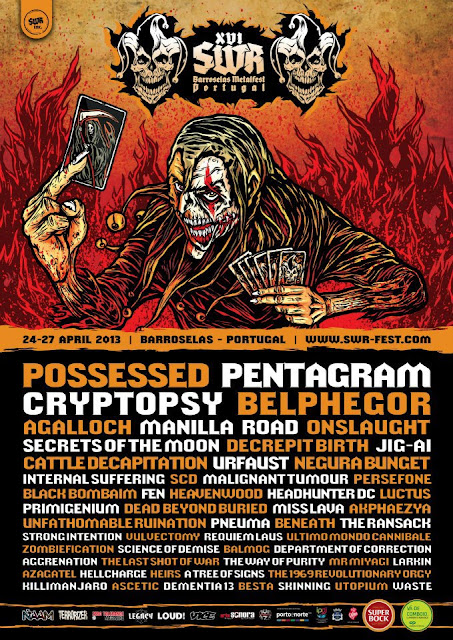 ENG - Nekronos Promotion had the honour to support and participate in one of the best and oldest Metal Fests in Portugal. It's the Steel Warriors Rebellion (S.W.R.) - Barroselas Metal Fest! A festival of excelence with a kick ass set, mainly dedicated to the Metal Underground!
One more year and one more outstanding festival with excelent lineup, organization, brotherhood, conditions, well... probably Portuguese best Metal Fest around!
Support and spread word, the organization deserve all your best! 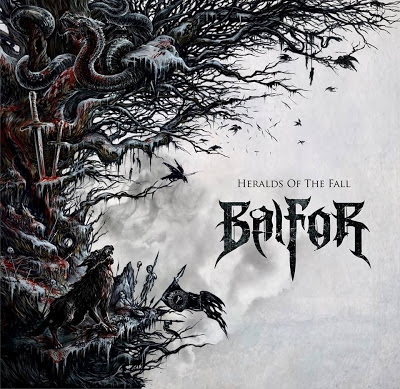 Ukrainian Black Metallers BALFOR are streaming pre-production versions of two tracks as a demo of what is to come on the band’s sophomore full-length album. “Heralds of the Fall” and “Wolfbreed” were recorded in November 2012 at the Blacklight Studio, Ukraine, with long-time BALFOR producer Dmitry “Yrt Glormkhaoth” Shulgin (VERMIS MYSTERIIS) recording the bass guitars, whilst the band’s former guitarist Alexander “Agnarr” Takhmazov (CONQUEST) recorded guitars. Keyboards are by Ivan Popov (AFTERMOON, INFERNO). It is expected that BALFOR will enter the studio to record the full album in the autumn of this year.
The two tracks can be heard on the band’s SoundCloud page at:
https://soundcloud.com/balfor/sets/balfor

Having recently announced a lineup change that saw all the former members aside from founder and frontman Thorgeir leave the band, BALFOR is set to play its first show with the new lineup of Thorgeir on vocals and guitars, Warider on guitars and backing vocals, Athamas (DEFERUM SACRUM and RAVENTALE) on bass and vocals and Khaoth (KHORS) on drums, on the 23rd June at the Kilkim Zaibu Festival in Lithuania along with bands like DESTRUCTION, TURISAS, EINHERJER and SOLSTAFIR. BALFOR will play a one hour set which will include old and new songs.

Check out the New Tracks here:

BALFOR : Heralds of the Fall : 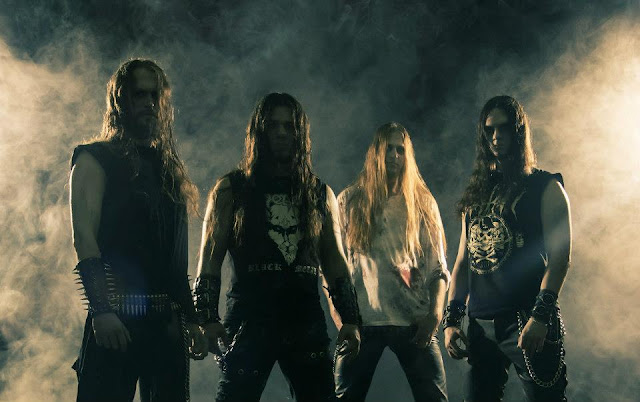 Ukrainian Black Metallers BALFOR have announced a line up change that sees virtually the whole band depart, with only frontman and guitarist Thorgeir remaining. Commenting on the reason for such a drastic change, Thorgeir said: “We parted ways for a variety of reasons and we hadn't actually worked together for a very long time. This decision was not an easy one, but it was a necessary one that took into account the needs and interests of all the band members, and I would like to take this opportunity to thank the guys for all this time we worked together, it was a great experience! But sometimes a change is necessary if you want to move forward”

With work having begun on the sophomore full-length album, BALFOR’s new line up, which consists of Thorgeir on vocals and guitars, Warider on guitars and backing vocals, Athamas on bass and vocals and Khaoth on drums, marks a new stage in the band’s development, one that Thorgeir is very positive about. “We have been rehearsing together since the beginning of the year, and I am now very sure that the new line up works just as well, if not better, than the previous incarnation of BALFOR, because new blood has brought a fresh perspective to the band’s music and a lot of enthusiasm. Warider, the new guitarist, is quite young, but hugely promising, whilst Khaoth has honed his considerable drumming skills with Dark Metallers KHORS. Athamas brings with him not only the experience he has gained with bands like DEFERUM SACRUM and RAVENTALE, but he is also a great vocalist, which is able to give an additional perspective to the BALFOR sound”. 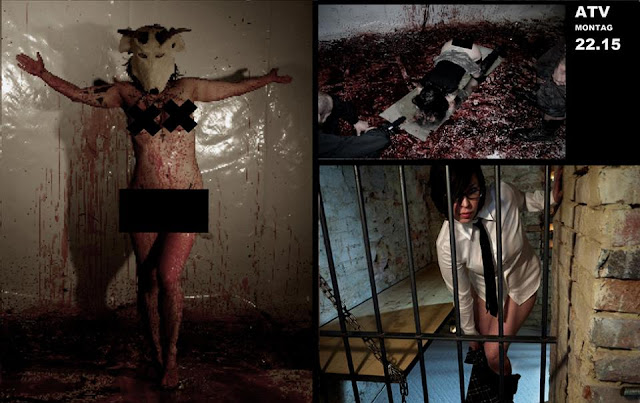 Documentary featuring Helmut Wolech [ actor/ former mortician/ bondage artist ] who did photos for BELPHEGOR´s last album, "BLOOD MAGICK NECROMANCE" and Mistress Rachael Kozak [ musician/ artist/ Domina ] who brought alot of ideas regarding concept/ lyrics for the last BELPHEGOR albums.
She also starred in the latest video clip, entitled "IMPALED UPON THE TONGUE OF SATHAN" [ photos by Helmut Wolech ].
Both will talk about their interesting life with director Paul Poet, such as Art, Bondage, Satanism, De Sade, Sadism. Do not miss it 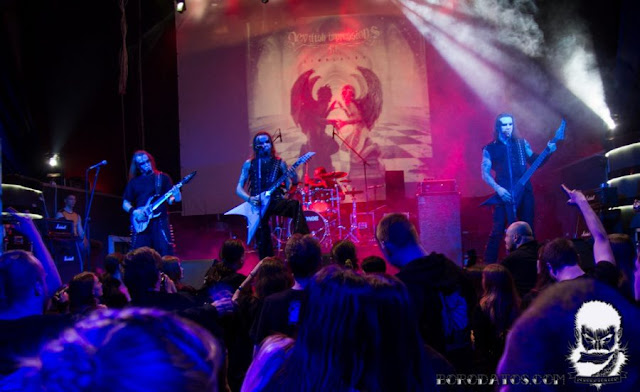 This is life on the road… Every-day reality… A drama… a comedy… and each night’s mysterious ceremony when taking over the stage. Watch the video footage from the band’s recent headlining ‘Fear no Gods of The East Tour 2013’ here: http://www.youtube.com/watch?v=C6Fzn7HMqfE

If you still do not own Devilish Impressions’ latest album, Simulacra, make sure to grab yourself a copy here: http://www.impericon.com/en/devilish-impressions-simulacra-cd.html
Or download it here: http://lifeforce.musiclogistics.net/releases/16738?lang=en 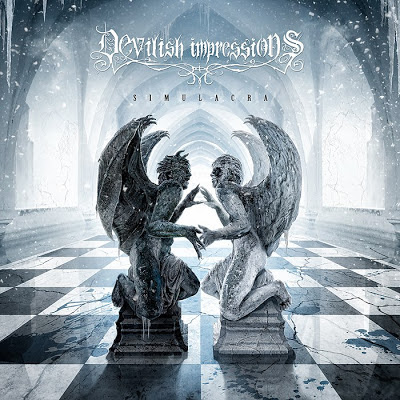 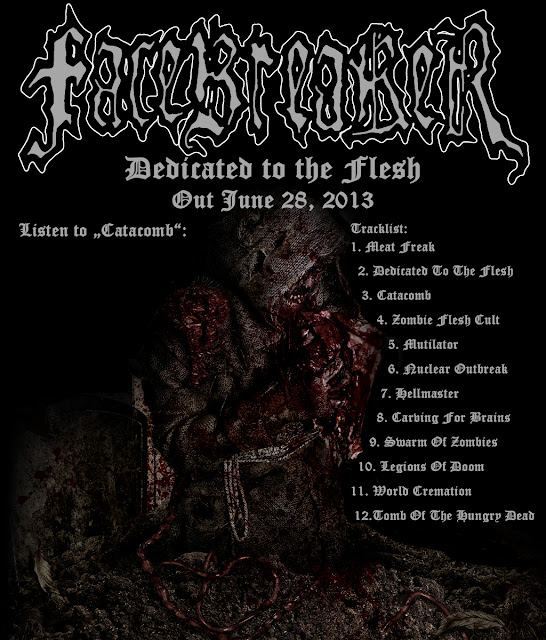 FACEBREAKER Swedish Death Metal Zombie Gods have just unleashed a the new track "Catacomb" from their new album "Dedicated to the Flesh". The new piece of undead metal art shall come out in the next 28th of June via Cyclone Empire label! FACEBREAKER feature Mika Lagrén (Grave) and Roberth Karlsson (Scar Symmetry, Tortyr , Aktiv Dödshjälp, Tormented, etc).
The new album will be one of the best pieces of the genre to come out in the last years! A piece not to be missed by any Zombie addicted Metallion who likes old school.Swedish death metal!!! Better grab your hatchets... they hunger for human livin' flesh!!!

Check the new track out at the following link: http://metal-recycler.de/facebook/Facebreaker/index.html

Check out FACEBREAKER third part of the Studio report for "Dedicated To The Flesh" new abum here: http://youtu.be/408on2b4he4

Haven't checked the previous ones yet? 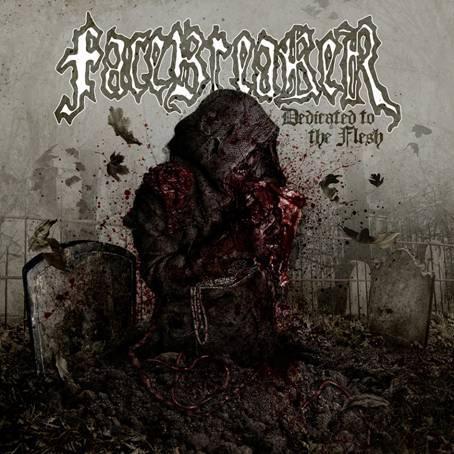 After the death of the band's bassist "Mortifer" last month, Polish act Hate has announced the group will remain active and has confirmed a string of festival appearances for the summer.

These dates will be in support of latest album "Solarflesh". Currently announced shows are available below, and the band also comments:

"We would like you to know that we have decided to continue with the band and keep on doing our job as always. There is still a big hole in our hearts, but we do not want to focus on mourning over the tragedy. Instead we decide to focus on the band and keeping it alive as well as all the ideas we shared with Mortifer."

"We treat what we do as a mission and we cannot see the end of it. On some shows to come we will be accompanied by Mortifer’s wife Alexandra on bass guitar. She has been in the business for some time and been involved in a few Russian bands before. As an experienced musician, she will undoubtedly manage on the stage with us.

"On other shows we will be joined by Piotr Kolakowski (Neyra), a talented musician who had previously been on stage with us as a session musician. The festivals below have been confirmed, but there are more to come soon." 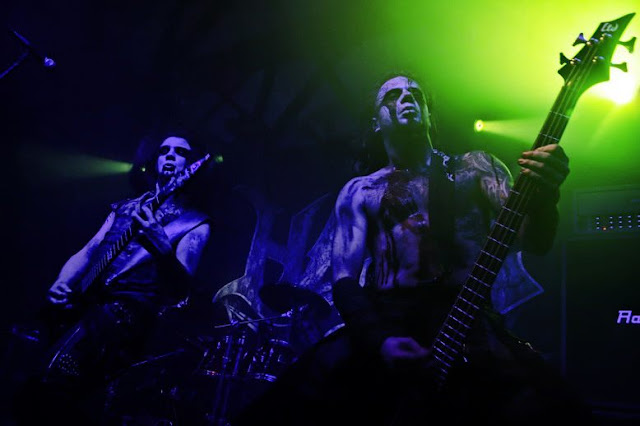 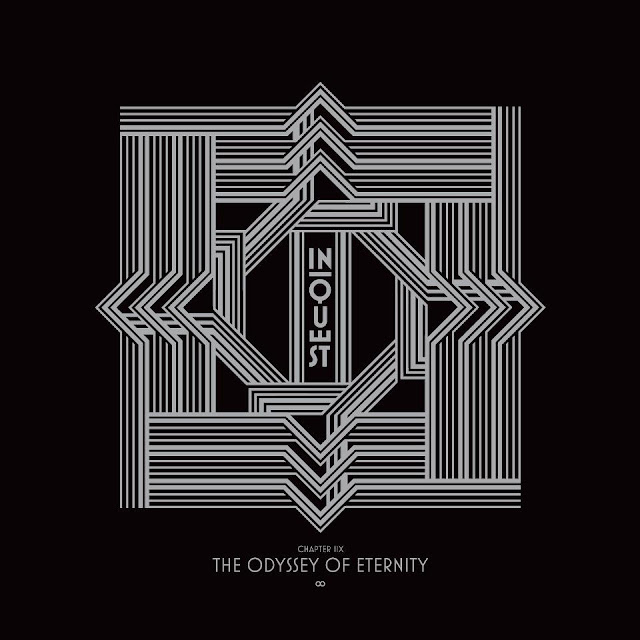 Here it is, "8 - The Odyssey Of Eternity", the new album of Belgian Death Metallers will see the light of day on the 1st of September. Get ready for the best and most mind-dazzling work they ever did! 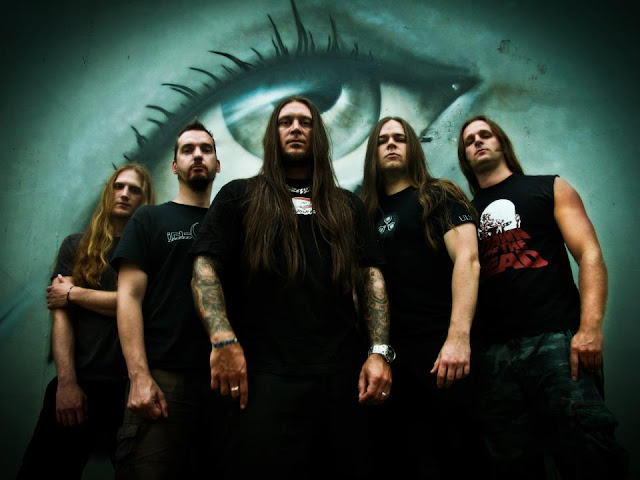 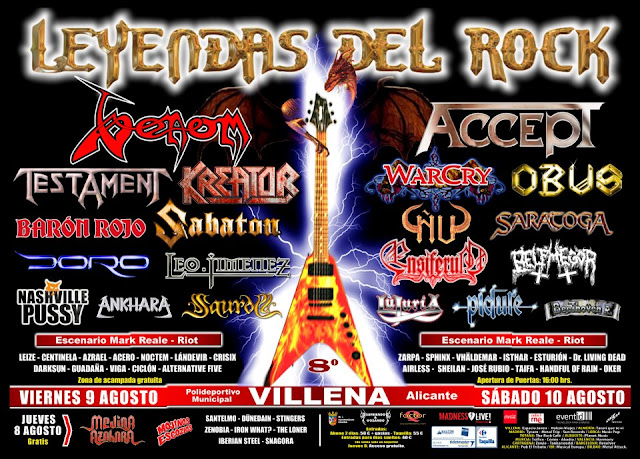 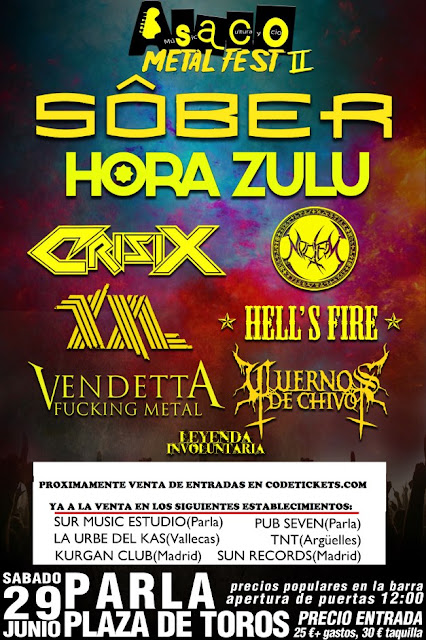 Noctem, Spanish Blackened Death Metal hellions are on the cover of the first issue of "Desde las Tinieblas" Magazine from Uruguay: 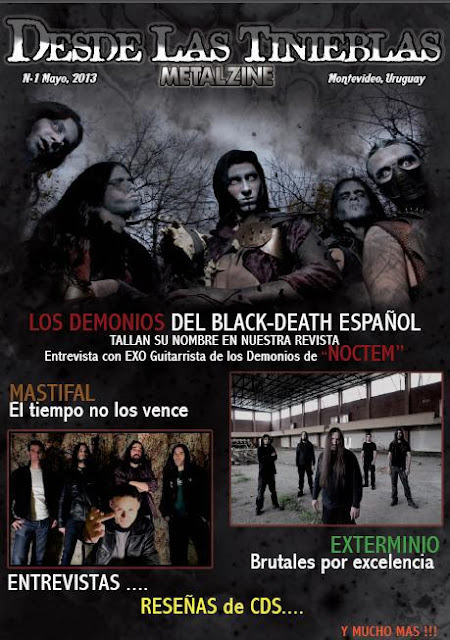 Noctem, Spanish Blackened Death Metal warriors are on the Cover of the new Necromance Digital Magazine. 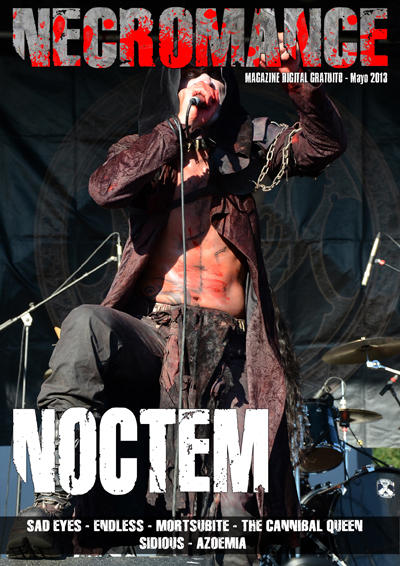 Finally GNIDA's live performances have begun! Right now we're after our 3rd show. We also applied for the Wacken Open Air Festival audition. The chance was given to us and we used it the best way we could. Here's a short fragment of our show. Huge thanx to all the bands we shared the stage with, to all the jury members, the tech-crew and all the public who shown up at Od Nowa. It's been a distinct PLEASURE to be there and get SO MUCH support! Thanx a 1,000,000!!!


Check out this VideoClips from GNIDA and share the hell Out!!
DEATHDAY : http://www.youtube.com/watch?v=MzyeonVMlDE

...there will also be some pics and more to come within the upcoming days.

Listen to our supported bands and many other killer Metal Bands on the Following Radio Stations: 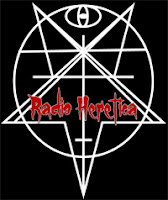 Wanna join our affiliated/supported Radio List? Mail us to nekronos.promotion@gmail.com and know how!

Posted by NeKronos Promotion Hell at 05:55

(Black Death Metal)
The I

Where Hatred Dwells and Darkness Reigns