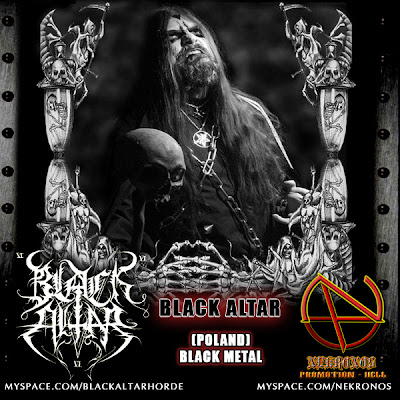 NeKronos Promotion is Proud to present the first band of the NeKroWeek, they are BLACK ALTAR, a killer Terrorizing Black Metal band for fans of Dark Throne, Immortal, Watain, Tjuder, Mayhem, Tulus and more!
Show your support and share this info to all your metal brotherhood if you like what you have heard!


The audio clip for the track "The Sentence" from the Mini-Album "Suicidal Salvation"
http://www.youtube.com/watch?v=qCcA7pRH-ls 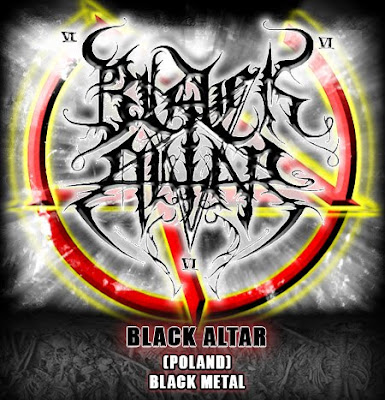 In the darkest abyss of chaos where time and space are impenetrable, Black Altar came into existence. It took its earthly shape during blasphemous Sabbath in the Night of Walpurgia Anno Bastardi 1996, when it was summoned by the voice of Shadow. He, as the first guardian of Black Altar, have started an unholy crusade, thus awaking fear and pain among the hypocritical and hideous christian lambs.

The first stroke into their rotten system of values was a demo entitled "Na Uroczysku..." which gained a special recognition among several groups of listeners. It was recorded by Shadow in 1997 at Selani Studio with the help of Doc, Vader's drummer, in the role of a music engineer and drumS programming. Released under Shadow's own label - Odium Rec., the first issue of 500 copies was sold out rapidly, making the name of Black Altar very popular in Poland and in other countries as well.
Where were many musicians involved, however none of them stayed long because they could not meet Shadow's high musical and ideological requirements. The turning-point came in the end of 1999 when two new musicians, who just like Shadow had shown boundless devotion to the Black Metal Art, joined the band.

In December 2000 a new, long-awaited EP entitled "Wrath ov the Gods" was recorded. Although all the compositions included were rather old, this record presented a new and more full-fledged face of the band. The EP was released in 2002, once again, by Odium Rec., this time as a limited to 666 copies hand-numbered with blood split CD with promising band Vesania. In 2003 Odium Rec. re-released "Wrath of the Gods" in the form of limited to 500 copies, hand-numbered with corpse blood, 7" EP.

In September 2003 at Selani Studio Black Altar recorded their debut album entitled "Black Altar". It was a great improvement in the development of the band. All the compositions show an enormous potential of Black Altar. The new hymns are still more extreme and more technical. They reveal the unknown regions of Black Metal - an Art destined for the privileged. "Black Altar" was mixed and mastered at Studio X. For the track "Fire ov Immortal Self" a professional video was recorded. In April 2004 the material is released in the form of CD and a gate-fold LP by the German Christhunt Productions. Odium Rec. releases a limited to 666 copies hand-numbered with corpse blood cassette version of "Black Altar".
After releasing the debut album Shadow parts with his musicians and as of that moment Black Altar became a one-man band.

In 2006 WarKult Prod from Peru released remastered version of Black Altar "Wrath ov the Gods" (with 4 bonus tracks) as split,slip case cd, with Nebular Mystic (Nor).

Black Altar it’s going to record 7 brand new tracks for a split with Shining and split with Varathron/Thornspawn.

Posted by NeKronos Promotion Hell at 00:17