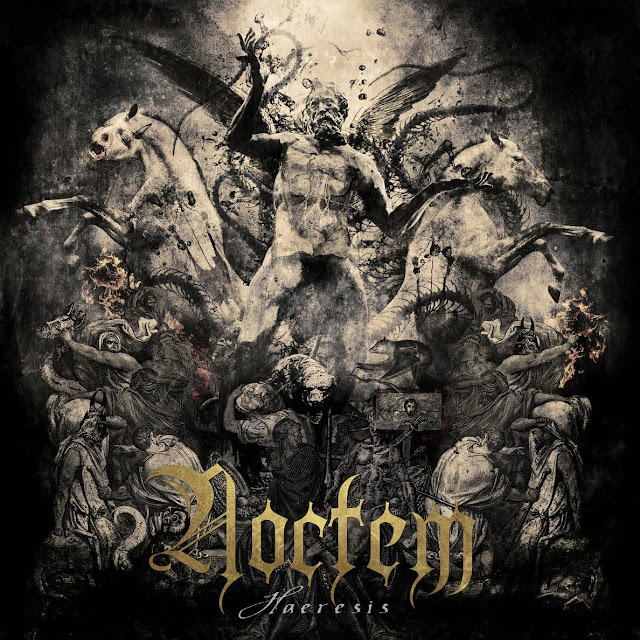 1. Through The Black Temples of Disaster
2. Auto-Da-Fé
3. The Submission Discipline
4. Blind Devotion
5. The Dark One
6. Haeresis
7. Whispers of the Ancient Gods
8. Conjuring Degradation and Morbidity
9. The Paths of the Lustful Abandon
10. Pactum With the Indomitable Darkness 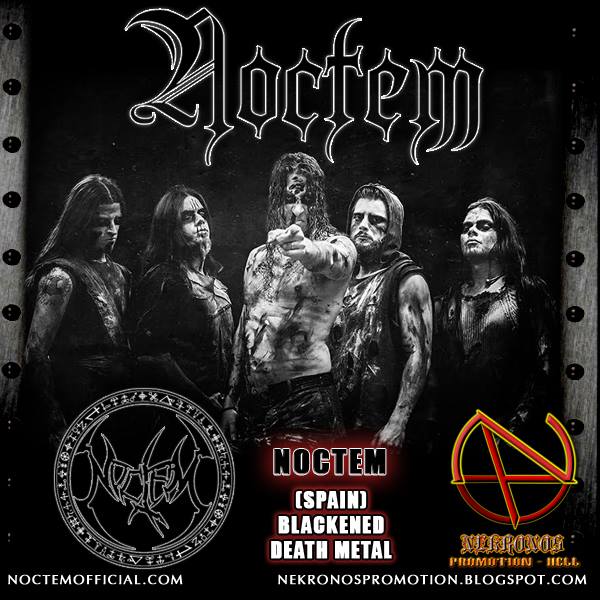 THE NEW ALBUM:
Iberian extreme metal outfit Noctem new chapter "Haeresis" will be be unleashed in the next 30th of September following the bands path towards eternal darkness!
After finishing the first conceptual album trilogy with the albums "Divinity", "Oblivion" and "Exilium", it's now time for the band to turn the page of their dark ever-growing blackened death metal force and embrace a new era. "Haeresis" is allot more than a new start,  denying stagnation and refusing to do the expected the band has reinvented their sound, keeping only their strong identity and Latin soul, the band has embraced a more organic old-school vibe of chaos and brutality... addicting and piercing songs one after the other will feel like a hard punch in your face! ...but wait... it gets stronger on each listening!
"Haeresis" is darker, stronger and deeper, in fact it's the most brutal piece of Noctem to the date! Even this album reveals a stronger approach to black metal... wait... nooo, don't expect freezing monotony or a soften epic/experimental sound like the most of the ancient black metal bands do this days... in "Haeresis" the band leads their sound towards the darkest and the most brutal blackened death metal pieces of 2016!

THE BAND:
For those who don't know the band so well, let me just tell you that Noctem are an ever-growing blackened death metal force from Valencia - Spain. The band started their extreme metal act in April 2001. Ever since then, their two founding members Exo and Beleth, who always been supported by great musicians, been forging the band strong identity and outstanding unique sound! Since early stages the band has been impressing metal media, labels, bands, agencies throughout the globe. This has allowed the band to tour with Samael, Hate, Incantation, Gorgoroth, Marduk, Taake, Nargaroth, Immolation among many others. This is a band not to be missed by fans of extreme metal titans such as Belphegor, Dark Funeral, Anaal Nathrakh, Behemoth, Marduk, Hate, etc.
The band blackest musical art has strong defined ideals, based on the antithesis of the whole absurd human religions, misanthropy and cult of the former civilizations, violence, destruction and death. The main conceptual theme for the new opus "Haeresis" is based on the Spanish Inquisition and it's hard times of torture, perversion and (un)holy crushing domination by the catholic church on such darkened times for Humanity!

NEW ALBUM DETAILS:
"Haeresis" is the proof Noctem's constant evolution! It sure sounds, looks, tastes and breathes different to any of its predecessor albums, yet keeping the dark essence and identity that the band has been developing through the years! You feel this in each track of the new opus! This album 10 brutally punishing tracks have been self-recorded and produced by the band itself over the Fireworks Estudios in Valencia, then it received the necromantic mixing and mastering touch of Tore Stjerna (Watain, Valkyrja) at Necromorbus Studio in Sweden. The result speaks for itself... the most brutal release to the date, an absolutely nefarious piece of extreme metal rotten art!
Deeply influenced by the bands concept for "Haeresis" the outstanding cover art by Seth Siro Anton Art (Septicflesh, Moonspell, Belphegor,etc.) portrays at best the epic and grotesque display of obscene torture extracted from the Spanish inquisition (1.500 A.C.).
Noctem always have explored their musician skills "in extremis", with it, forging the most Epic and Apocalyptic tracks in their extreme metal history. With the incursion of new blood on the band with the bassist Varu, the drummer Voor and guitarist Ethell the band has grown stronger, yet keeping their quintessence and fatal formula! In "Haeresis" Beleth has done, in my opinion, the best and most dynamic black/death metal vocal work of Noctem history, alternating between dark unclean vocals to vociferations and guttural with a truly venomous touch, damn... what a pestilent performance for such flammable album! Exo, the other founding member, has done one of the most brutal and inspired works of its own, damn brilliant leads, breath-taking solos and brutal guitar structures, yet still with the bright incursion of Latin influenced classic guitars which give an even stronger identity to all Noctem creations!

TRACK BY TRACK:
Unlike the band's previous albums, here we have no introduction song, the listener is unleashed upon the burning pyres of Inquisition fire "Through The Black Temples of Disaster" where light has turned into darkness, this is the first and longest track of the album, without a doubt one of the most a virulent addictive tracks, here the choirs give an even stronger haunting aura to this epic blasphemy!
Another track and another innocent woman burns at the stake over another purifying "Auto-Da-Fé", ritual of public punishment by the sadistic catholic church, again a fast song that has it's delightful classic guitar dark momentum giving the final rest to the already burned victim !
No rest for the wicked they say, "The Submission Discipline" Crowned as graceful instrument of God comes forwards and unleashes the fury of a thousand oppressed "sinners". This is probably one of the fastest tracks of the album still with some wicked slower classic guitar incursions that elevate this track to the next level.
Follow the steps of the "Blind Devotion" a penance carved in flesh, this song is a dark painful march of those blind followers of dogmatic doctrines of pain and misery, this song ends up with a damn killer guitar solo!
Praise "The Dark One" collector of martyrs for the pyre, this is probably the most hard and brutal track of the album, fast and venomous, this pestilent worship ritual is a true blast to the listeners ears!
"Haeresis" an abomination to the eyes of god, is the title track and another fast piece of epic extreme metal art!
"Whispers of the Ancient Gods" older than the last of the masters that governed the earth, they will return to reign where men do. This song has a very special epic vibe which relates more easily with the bands previous works!
"Conjuring Degradation and Morbidity" the dark secret art of necromancy, not distant from the bands previous albums formula, yet with a much more brutal approach this is a great melodic blackened death metal track!
"The Paths of the Lustful Abandon" Like animals searching for satisfaction, for sweet flesh, for ecstasy, for pleasure. This is another dark march of the wicked and perverted slaves by own will, here the choirs fill the song with an eerie atmosphere of flagellation!
"Pactum With the Indomitable Darkness" liberate me from my inner pain. The ending track which starts with a classic guitar interlude of fear and wonder erupts into a brutal epic piece of blackened death metal art that finishes the album in a horrid scenario of flammable purification!

CONCLUSION:
"Haeresis" is without a doubt the most mature, brutal and addicting of Noctem creations! Expect no softness here, more ruthless than Torquemada the infamous Spanish Inquisitor himself this is a brutal Beast of epic proportions. This album is one of the best extreme metal releases ever to come out from Iberian lands! A dark work of excellence with all the right pestilent elements to turn this album into one of the best blackened death metal albums of the year 2016! Reinventing their sound, the band has reached a new chapter in their ascending career. A strong new band to keep an eye on and follow closely in future endeavours!

Stand on your own feet and live your own life, avoid the pestilent (un)holy sheep struggling for power and domination, with a blessed sadistic contempt they oppress any opposing free will! Against the submissive chains of religion become your own God!

"Through the Black Temples of Disaster" : Audio Track:
https://www.youtube.com/watch?v=A0e1v5m3AT8

Posted by NeKronos Promotion Hell at 04:30