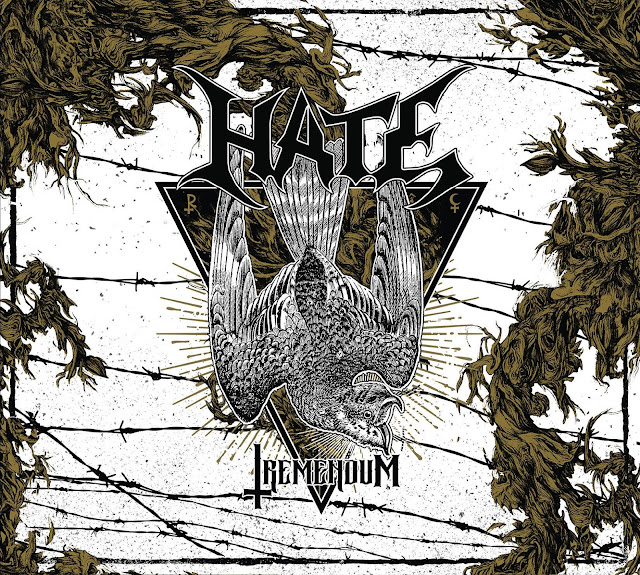 "The drawing on the cover depicts a nighthawk (Polish: lelek), a nocturnal bird that was treated with great respect by Slavic tribes in pre-Christian times. Nighthawks were believed to bring souls to this world and take them away from dying people. In that case they gathered in big numbers screeching for long hours. So they were called „messengers of death”. As this album has different Slavic references, we chose Nighthawk as a symbol that best conveys its meaning." HATE 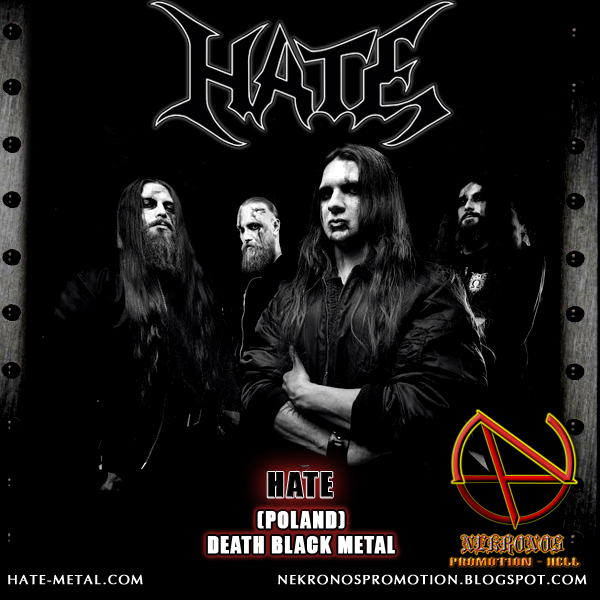 * eeriness and the fear of the holy

"Undeniable acceptance of programmed fate
Non sanctuary! It won't be redeemed
You feed the flames of Tremendum
And be buried with your doubts in graves
Revelation emerges in death
Welcome endless day
Saviours of mankind eaten by schorching abyss
Again and again" - Fidelis Ad Mortem - Tremendum

HATE death black metal leviathans and one of the biggest influence over forming Polish metal scene in the nineties are back with a new piece of darkest art! "Tremendum" is the new ritual and presents the bands extreme metal sound from ashes reborn! The band went deep into their Slavic roots for inspiration on recreating their own sound. Harsh and yet solid as a rock, the powerful new sound arises triumphant with a slight touch of patriotic folk combined with scorching death black metal that will set your ears ablaze!

"Tremendum" is the 10th original full-length of this death black metal tyrants and one of those albums that grows on each listening! First you will notice the changes within the new sound and then it will become a true addiction! A breath of fresh air within the bands traditional sound, proving that this impressive band born in 1990 is constantly changing and refusing stagnation! The new blood within the band (Domin - guitars and Apeiron - bass) have contributed with their crafted natural talent and allowed the band to grow even more from the previous and highly acclaimed release "Crusade : Zero". The virtuous illuminated guitar solos by Domin and Dean Paul Arnold (guest guitar: Vital Remains, etc.) are beyond impressive, the brilliant and dynamic drum work with the incursion of progressive beats by Pavulon allow the band to reach the highest mountains of might! ATF Sinner powerful vocals and eloquent lyricism as well as HATE's tremendously solid musical structures and endless musical resources make this album become an authentic monolith of extreme metal!
For the new album the band decided to work with Polish extreme metal guru Arek "Malta" Malczewski (Behemoth, Decapitated, Devilish Impressions, etc.) at Sound Division Studios, the result is beyond impressive and extends HATE new sound into an absolute new level!

"Tremendum" is in its essence the blackest form of death metal, a result of decades of extreme metal craftsmanship and dominance! HATE have combined with their quintessential authentic sound some folk, darker and even slightly progressive elements that enrich the whole work, with it, HATE renews the already overwhelming extreme musical experience.
The new album works pretty much as a whole since the militant epic intro for the song "Asuric Being" to the Epic ending track "Walk Through Fire" which includes some lyrics in Polish! Tracks like "Asuric Being", "Indestructible Pillar", "Svarog's Mountain", "Numinosum", "Into Burning Gehenna" and "Walk Through Fire" are some of this albums finest expressions, an outstanding mix of death metal fearsomeness and enthroned black metal massive darkness.

"Tremendum" is a timeless work of unholy art and a proof of HATE perseverance though the years! Triumphant and luminous, the band new masterpiece is one of the bands best and most solid releases to the date, proving with it that HATE are an immortal force of nature reborn from the everlasting flames of creation! The band has once again conquered all with another mutation of their metamorphic extreme metal sound, this time darker and deeper into Slavic roots and myths!
HATE sound reborn takes you to times before the light where the notion of holiness was still undefined, both good and evil! A savage form of illumination of Nature's strongest source, a barbaric essence of thunderous glory!
"Tremendum" is without a doubt one of the best death black metal offers for 2017, an ambitious and fierce new album enriched with dark melodies and a strong rebellious message, unleashing authentic timeless hymns of might and hate!

Posted by NeKronos Promotion Hell at 09:47