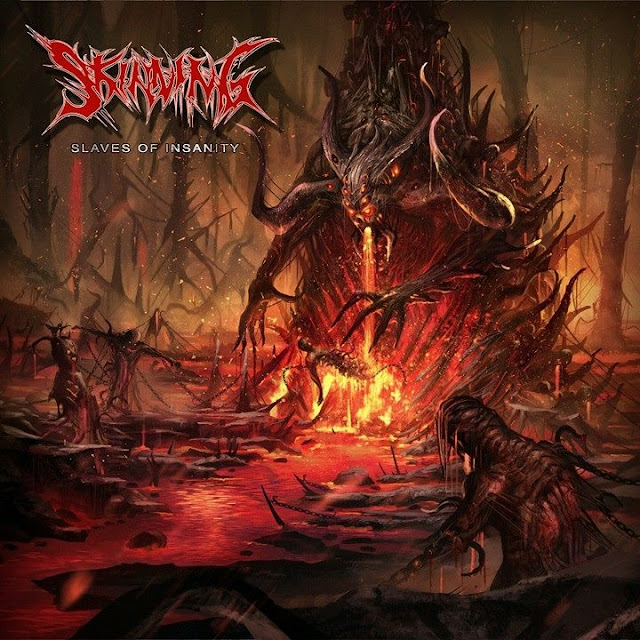 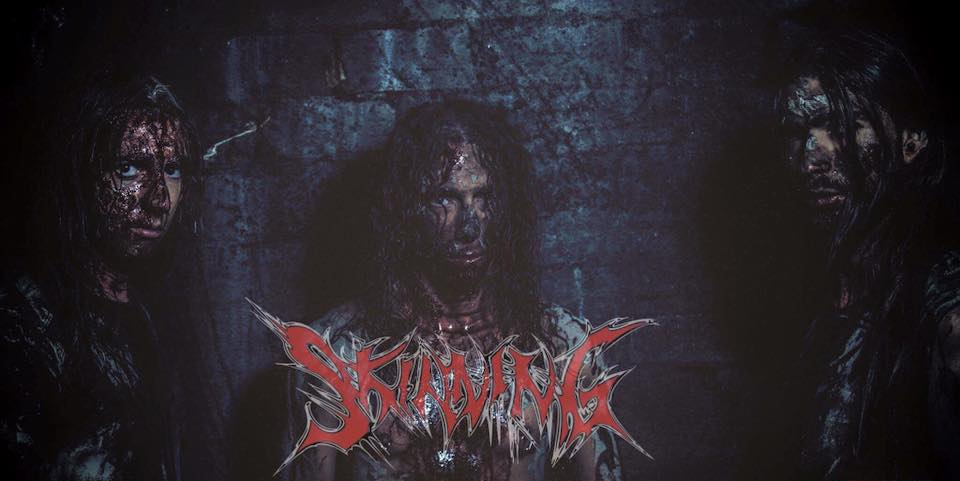 *Skinning ( the act of skin removal )
"(...) I choose you, to be my Slave,
You will realize, all my wishes
I will chain you.
In my Torture Chamber"  Torture Slave - Slaves of Insanity

Are you ready for total mayhem, chaos and destruction? This is what the new SKINNING album is all about! "Slaves of Insanity" is the new demolishing death metal piece by this band that was forged in December 2011 in Guimarães (Portugal). The band was formed originally by Luís Barroso (Skinning, Daemogorgon, ex-Hacksaw, etc.) and Vítor Lopes (Skinning and PosMortiis).

"Slaves of Insanity" is the second full length of this death metal torturing demons, a natural step forwards from their debut "Cerebral Mutilation" showing an improved merciless death metal machine influenced by bands such as  Vader, Krisiun, Decapitated, Morbid Angel, Deicide, etc.
The new slashing work which cover art was illustrated by Portuguese impressive artist Pedro - Lordigan, was produced by André Matos (Heavenwood, Web, etc.) and mixed by Bruno Silva (Secrecy, Sonneillon, etc.) and it is one of the Raising Legends label best offers for the past year of 2016!

"In the Name of the Whisper" track which originated the twisted/sick music video by Guilherme Henriques (Belphegor, Hideous Divinity, etc.) ignites a bloody killing spree and there is no escape from it! Expect nothing but chainsaws tearing flesh from bone, heavy artillery raids in a merciless death metal massacre!
One after the other, the fast vicious tracks keep on coming, SKINNING slaughtering sound will keep you captive to this piece of torturing art! Versatile brutal drums, heart-slashing bass, strongly aggressive vocals and virulent guitar-work are already a trademark sound for this young Portuguese band, making them one of the best in their genre in their homeland!
With "Contagious upon Us", the albums longest track with 5 minutes :) , the band slows down the killing rate and enters an epidemic groove that contrasts with the short track frenetic rhythm of the whole album.

"Slaves of Insanity" is in all its length a death metal torturing piece of flesh hacking art! SKINNING are becoming one of the best Iberian death metal expressions this days, their sound, so brutally fast is an authentic meat-grinder of demonical proportions! Expect no softness here, this is death metal right in-your-face!
"Slaves of Insanity" deviant extreme music will make you hunger for the bands future endeavours! Bestial Brutality and Aggression awaits you, I am sure... and that is always something worth waiting for if you are a death metal fanatic!

"In the Name of the Whisper" - Official Videoclip:
https://youtu.be/2QqU07JG-kc

Posted by NeKronos Promotion Hell at 08:50