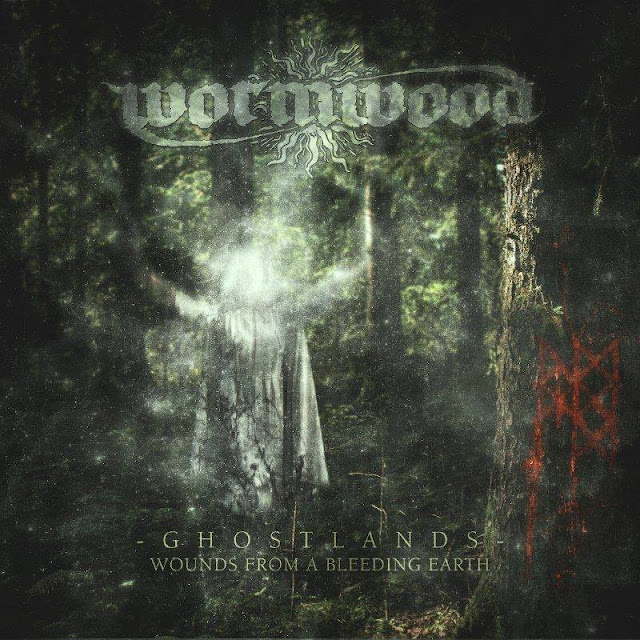 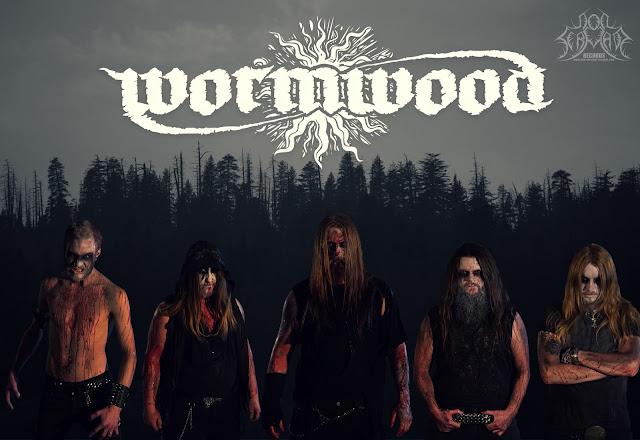 From the frozen northlands of Sweden rises the ultimate Atmospheric Melodic Black Metal band by the name of Wormwood, a new horde of mighty heathen warriors arise to set a mark on today's day's saturated extreme metal universe!
It's still hard for me to believe that "Ghostlands - Wounds From a Bleeding Earth" is only the bands debut full length album! Pure Scandinavian art with such elaborated and majestic details is beyond impressive to say the least! An album that will hook you up since the very first listening, so addictive that will force you to listen to it again and again! Without any doubts one of the best offers of the genre for 2017, unveiling a promising future for such a young band!

The Band:
Forged in the heathen flames of Rydsheim (Sweden) in 2014, Wormwood emerge with an innovative atmospheric and melodic black metal with all the right dose of folk, rock and experimental music, all to create a very own dynamic sound! Wormwood members past include bands like Åskfödd, Withershin, Riket, etc, yet never before they created such a rock solid folk/heathen sound!
Back in 2015 the band has recorded their debut EP "The Void – Stories From the Whispering Well", a mix of folk, black metal and rock n' roll! Not yet fulfilled, the band has reshaped their sound for their debut full length, creating an outstanding atmospheric black/folk metal piece of art!
Wormwood creatively relentless sound will surely please adepts of bands such as Månegarm, Thyrfing, Borknagar, Kampfar, Enslaved, etc!

The Album:
"Ghostlands - Wounds From a Bleeding Earth" is one of those albums that shall keep you captive to each track since the very first listening, the whole album is an ethereal blend of genres from black metal, folk and rock, all well balanced and with an overwhelming atmospheric background! "Ghostlands ..." is allot more than just another extreme metal album, it's in fact so well conceived and addictive that quickly shall make you embark on an enriching musical journey from which you shall not forget about!

Deeper into the Album:
"Ghostlands ..." has been recorded at Wing Studios by the Swedish extreme metal wizard Sverker Widgren (Demonical, Diabolical, Centinex, etc...) the final result is impressive and enhances the performers talent to the maximum!
Wormwood have found within their musical alchemy the right dose and proportion for each of this album songs finding with it the right balance to keep the listeners captive to the whole piece!
This epic journey starts with the crescent folkish atmospheric intro "Gjallarhornet" that will leads to "The Universe is Dying", a tune with such a timeless melody that's impossible to be indifferent to! On tracks like "Under Hennes Vingslag" or "Oceans" the band dares deeper and combines some experimental elements into their already organic metal fusion, moments of clarity I must say! "Godless Serenade" has been the choice for this album's epic music video, shot far above the Arctic Circle, it's homage to the Scandinavian natural wonders, the song carries a deeply strong epic aura.
Among other tracks there are two memorable folk hymns with such a catchy melody that shall get stuck on your ears, they are "Silverdimmans Återsken" that connects with "Tidh ok Ödhe". Easy to find yourself singing along with such delightful songs... sublime intense tracks like these ones give me shivers on my spine... PRICELESS!!! The fiddle melody by Martin Björklund (Månegarm, Mercury X) and the enchanting female guest vocals by Alexandra "Lalla" Moqvist make all the difference!
One after the other, each track has a very special and contagious positive vibe, melodic folk metal with all the right dose of heaviness and blackness! Tracks like "What We Lost in the Mist" or the ending "To Worship" will let no one indifferent to such epic might and lore!

Conclusion:
"Ghostlands - Wounds From a Bleeding Earth" is in all it's length a monumental journey across ethereal landscapes of sound and Scandinavian folk tales and legends, so well conceived that risks to become a extreme metal legend itself!
This epic folk masterpiece is powered with such positive energy that easily bewitches you within such graceful haunting themes, one after the other! This is an extreme metal musical experience of which you need to be part to witness such timeless splendour!
Wormwood's darkly dramatic and yet so addictively intense and unique musical mix has elevated this album into one of the best pieces of the genre! Bone-crushing riffs, dramatic keys over a breathtaking sound scenario make "Ghostlands ..." a highly recommended album not to be missed at all!

Posted by NeKronos Promotion Hell at 14:35