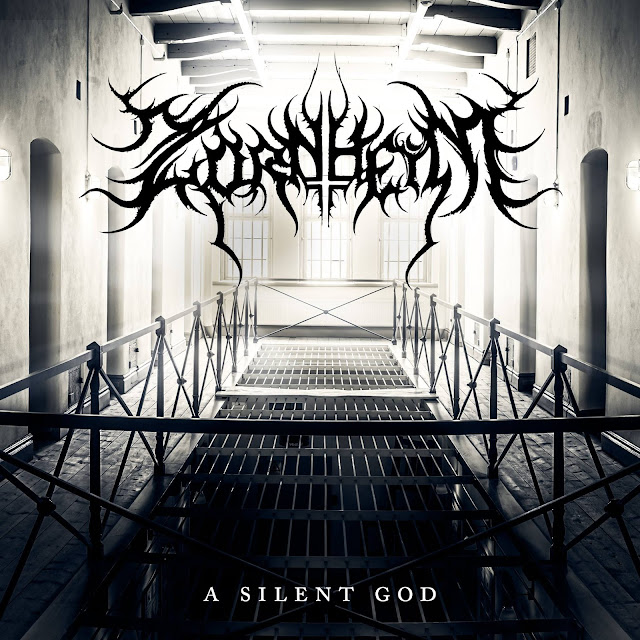 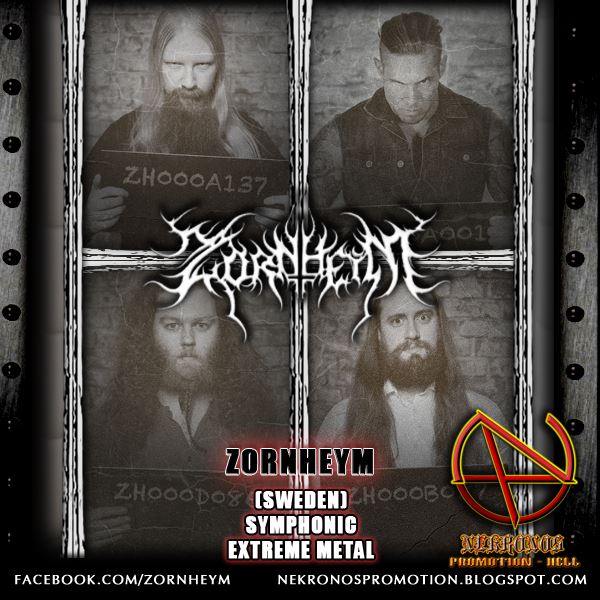 "(...) All shall perish
I'll devour you to claim your strength
All shall perish
Bleed me a river of ever flowing blood
I am
A silent god with no love nor compassion
I am
The beginning of unrestrained horrors (...)" A Silent God - Zornheym

From the Swedish lands of ancient heathen deities comes the "Silent God" the latest single of the ultimate symphonic extreme band by the name of Zornheym. This band is constituted by the multi-instrumental songwriter Zorn (Aktiv Dödshjalp, ex-Devian) the singer of a thousand voices Bendler (Facebreaker, Engulfing Rage) the top quality drummer Angst (Diabolical) and the devilish music arranger and guitarist Scucca (Encrowned).
"A Silent God" is part of a complete new horror concept brought fourth by Zornheym. A complex and extensive work of excellence that is the materialisation of Zorn's long time deviant Master-plan to create a whole new symphonic extreme metal theatrical experience!
The whole Zornheym's piece will surely please adepts of bands such as Dissection, Dimmu Borgir, King Diamond, Behemoth or Emperor!

Straight out of Zornheim asylum comes another inmate horror tale to be told! Time for "A Silent God", again another impressive symphonic extreme metal piece to be featured on the bands debut full-length "Where hatred dwells and darkness reigns". A complex conceptual album with an outstanding horror story attached to it! This may remind you of King Diamond horrid conceptual creations, yet in here the whole album experience will make symphonic extreme metal adepts go insane, not only for the whole album musically, but also for all the detail and hard work behind each songs tale to be told!
Since the beginning Zornheym horror story concept is intended to be much more than just a musical experience, the comic book strip drawn by Anu Bring (Märvel, Evil-lÿn, Satan’s fall,etc.) takes each song to an absolute higher level, a true delight to any horror story adept! The whole idea is still fresh on an already saturated metal music industry!

Once you compare "A Silent God" with the debut single "The Opposed" you can notice that on this new track the vocals take an even more important part on it, variations from Bendler's darkest unclean vocals to the clean melodic ones done by the guest musician Cain Cressall (Cain Cressall, The Amenta) in addition to the almost omnipresent full choir create an elaborate vocal structure! Apart from this vocal dynamism the song keeps the bands essence within its refined and strong orchestral structures featuring a live string section performed by Dies Iona Ensemble, this sure takes the whole symphonic elements to an absolute new level!
Again a virtuously inspired guitar solo by Zorn enhances the whole melody into another genius musical peak! In fact "A Silent God" track has such a heavy melodic balance that quickly becomes addictive! Impossible to listen to this "catchy" song just for once!

"A Silent God" single cover art was again created by Jens Rydén (Marduk, Thyrfing) and shows the entrails of Zornheim Asylum. The single was recorded at the Wing Studios in Sweden by the veteran sound wizard Sverker Widgren (Demonical, Diabolical, October Tide, Etc.).

With the majestic blend of both musical and visual creations the band intends to shake traditional extreme metal grounds with a whole new vision and symphonic experience to feast both ears and eyes of their fans! "A Silent God" is an excellent expression of how Symphonic extreme metal was meant to be, melodic but still heavy as hell, this lethal track will surely make you even more eager for the full length album to come in the near future!
"Embracing the madness inside its own sanity, the bloodthirsty God will come swiftly and silently to claim your life!"

Posted by NeKronos Promotion Hell at 16:16