Here we are to present and review "Exilium" the latest piece of extreme metal art by the Spanish leviathans Noctem. This ever-growing metal force never stopped to impress me work after work, stretching their own limits and finding no boundaries. With only 3 releases out, Noctem reveal the "know-how" of bands that been ages on the field!
"Exilium" is without a doubt their best and most mature release to the date, a grandiose epic piece of blackened death metal art that shall make you captive since the very first listening!
Closer than ever to the black metal arts, this addicting album is darker and even more aggressive than its predecessors! A "must-have" release for fans of bands like Behemoth, Dimmu Borgir, Fleshgod Apocalypse, Septic Flesh, Belphegor, Hate, still with their very own Latin identity.
Witness Mankind's decay on this final piece of Noctem's apocalyptic metal trilogy. Humanity falls and new Gods of the Underworld (black death metal) rise! With "Exilium" the band has proven to be among the elite of extreme metal. Without any doubts this album is one of the best black death metal albums of the year 2014. 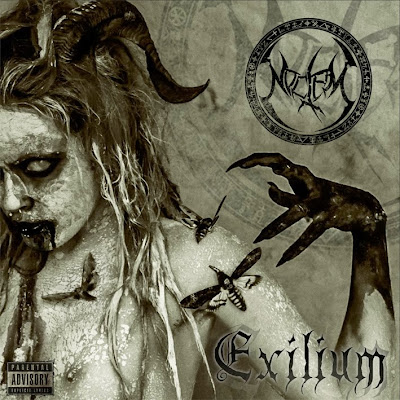 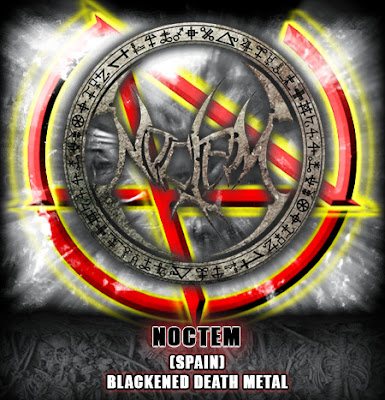 "(...)On the battlefield the corpses rot,
The lightings illuminate the sky and
the crows eat their dying meat.

They remained as torn flesh,
in the wild and arid earth there is no glory for the dead." The Adamantine Doors - Exilium

The band:
Noctem are an ever-growing blackened death metal force from Valencia - Spain. Started their extreme metal act in April 2001 and since then their two founding members Exo and Beleth, that always been supported by great musicians, been forging their band strong identity and outstanding unique sound.
Through their three album ascent across this conceptual trilogy that started with "Divinity" the Epic, developed on "Oblivion" the Brute and now ending with "Exilium" the Tempered, Noctem's darkest sound has been crowned Triumphant! The maturity reached within this new release is the proof of the bands geniality and "know-how". It has taken ages for several other bands to reach such elite levels.
Their blackest musical art has strong defined ideals, based on the antithesis of the whole absurd human religions, misanthropy and cult of the former civilizations, violence, destruction and death. This band has been impressing metal media, labels, bands, agencies throughout the globe. This has allowed them to tour with bands like Samael, Hate, Incantation, Gorgoroth, Marduk and Immolation. This is a band not to be missed by fans of extreme metal titans such as Behemoth, Dimmu Borgir, Fleshgod Apocalypse, Septic Flesh, Belphegor or Hate.

The new album musically and lyrically:
In "Exilium" the band has combined the best elements of the previous albums, the epic vibe of "Divinity" and the brute force of "Oblivion", all done with the right balance of venomous melody and blackest epic atmosphere. This dark offspring of musical geniality is another step forwards on the bands career, without a doubt their most mature and grandiose piece to the date, the incursion of majestic choirs, acoustic melodies as well as darker orchestrations have brought this album into an absolute new level. This is a colossal extreme metal piece since the beginning to its end!
"Exilium" reveals Noctem as one of the most dynamic and creative extreme metal forces from southern European lands, constantly re-inventing their own sound release after release, all this with a very own Latin identity!
Brilliant and illuminated is also once again their cult lyricism, inspired on this work particularly by ancient Babylonian / Sumerian mythology and their deities as well as by great philosophers like Friedrich Nietzsche. Plain apocalyptical philosophical art not to missed or unread, even more since this is the last part of this Trilogy about the Odyssey of Mankind on this world... experience the fall of Human kind upon this epic journey. Lifeless it lays on rotten fields of defeat, crushed by time and by own greedy suicidal nature!
All this apocalyptical concept was adorned with great artworks such as the cover work done by Edmundo Saiz, a famous photographer from Valencia.

The band members and album production:
Noctem have been exploring their musician skills to their maximum on this new album, getting the most Epic Apocalyptic tracks in their history. With the incursion of new blood on the band with the drummer Vhert and guitarist Nekros the band has grown stronger, yet keeping their quintessence and fatal formula!
Across the whole album Exo work is simply brilliant and virtuous, the guitars are about perfect, the leads delightful and the incursion of acoustic elements simply genially awesome. Beleth both lyrical and vocal work are a perfect match to this brutal epic piece of metal, unleashing great daemonic slashing growls! Vhert has proven to the the best choice to sit on Noctem's drum-kit, his work has managed to overcome what has been done by his predecessor, damn tight and dynamic drums, Vhert sure allowed the band to venture further in the aggressive fields of extreme metal. Ul (bass) and Nekros (guitars) have contributed with some great rhythms from inflammable hell to this epic piece!
The recordings on AGR Studios (Valencia) and album production by the band and once again by Daniel Cardoso (Anathema, Switchtense, Angelus Apatrida) has been one of the best and most demanding pieces done by this famous Portuguese producer, top quality sound, clean, dark and epic!

The album track-by-track:
Once again, like on the previous album, an apotheotic epic intro invades our ears once you start listening to the new Noctem's opus, "Enuma Elish" (Babylonian creation Myth) introduces "Apsu Dethroned", an authentic whirlwind of chaos and destruction, enhanced with the incursion of great fitting choirs. With the primordial Babylonian water god dethroned it's time to enter the "Decrepit Human Kingdom" where mediocrity turns into divinity, another powerful track with a catchy middle-eastern like melody into. The "Namstar's Crown" follows, a razor sharp slashing track, vicious and demolishing this track hails to the might of this ancient god of destiny. Time for "The Rising Horns", an elegant yet strongly addicting track, adorned with great acoustic elements, an ode to the great warriors ( symbolizing to the fans of the band ) without whom victories can't be achieved! Eerie Siren and mystical choirs lead you into the "Halo of Repugnance" where the dead hands of religion sterilize human wisdom and lead their civilizations to ruin; this is just another epic melodic black pearl on this album. "Egregor" is a gloomy acoustic instrumental with haunting choirs that shall make your mind transcend. "The Splint of Destinations" follows, an authentic pestapocalyptic beast of epic proportions, fast and cruel this is a demolishing track glorifying the Mighty, free of a stifling dogma! "Eidolon" the spirit image of Ereshkigal queen of the dark, brings fourth one of the best tracks of the album, it shows the best of Noctem's recreated sound, strong, darker, epic and timeless! Time now for the Armageddon of human kind on the "The Adamantine Doors", an excellent apocalyptic ending track bearing witness to the ruined fall of Mankind!

The Epilog:
"Exilium" is without a doubt the best and most addicting albums ever created by the band and one of the best extreme metal pieces for 2014! A daring work of excellence with all the right elements to triumph on this saturated metal world, a refined blend of extreme metal! Their creativity and geniality has always allowed them to grow and reach higher grounds. Noctem keep on surprising it's listeners with such bombastic sound quality and strong identity, forging epic black death metal masterpieces one after the other, with all this, they make you anxious for future endeavours! "Exilium" is one of the all-times best extreme metal albums to come out from southern European lands, a diamond in every extreme metal Metalhead collection!
Ancient Divinity, the cradle of a doomed humanity, cursed to rise only to fall again into Oblivion... an age of Man, the Exilium of a race born to destroy itself within all its deviant greed and insatiable power hunger

Posted by NeKronos Promotion Hell at 02:40