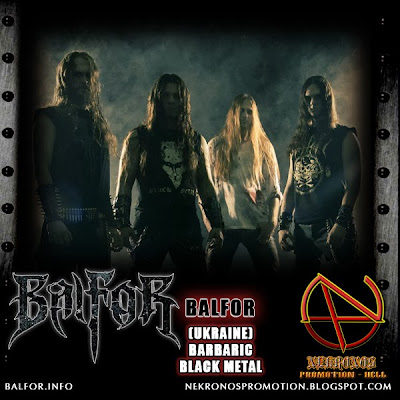 NeKronos Promotion is Proud to present the second band of the NeKroWeek, they are BALFOR (Barbaric Black Metal), a smashing quality band to come from Ukraine soils.A band for fans of Satyricon, Immortal, Dimmu Borgir, Keep of Kalessin and more!
Show your support and share this info to all your metal brotherhood if you like what you have heard!


The audio clip for "Heralds of the Fall" from their yet unreleased album:
http://youtu.be/TNgjeCQz9OI 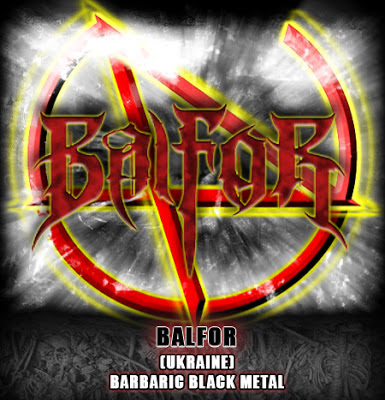 BALFOR was formed in November 1997 in a small town in eastern Ukraine, as a side project of Thorgeir - vocal/bass/guitar, and guitarist Svart, to play fast, but melodic, Black Metal. The band released their first album “Volki Severa” in 2001, and, following a number of personnel changes, and encouraged by the positive reviews the LP received, Thorgeir decided to concentrate all his energies on BALFOR and develop the band further. Berowar came in on bass in November 2005 and the two formed the core of what BALFOR was to become.

Defining their music as “Barbaric Black Metal” in tribute to the history of their homeland, BALFOR released their four-track promo “Pure Barbaric” for free download via a net label in 2006; a move that proved to be extremely successful in terms of raising the band’s profile and garnering a substantial following throughout the world. BALFOR’s fan bases, and reputation, were further increased by various live and festival appearances.

BALFOR today? With the release of the new album “Barbaric Blood”, it is obvious that founder Thorgeir has developed into a charismatic front man who is able to switch from aggressive black, to soaring melodic clean vocals with consummate ease, whilst BALFOR’s effortless ability to cross the melodic/black/death/extreme metal genres draws to them a diverse range of fans. “Barbaric Blood” is definitely one of the defining moments in BALFOR’s career.

Posted by NeKronos Promotion Hell at 01:47