Here we are to present and review "Limits were to be broken" the new double CD release from the Polish death black metal masters Sammath Naur! Without a doubt they are one of the most creative and dynamic bands on their genre. This new release unites their two latest albums "Beyond the Limits" [2012] and "Anhedonia" [2011] in a pack full of bonus material, mind-blowing diversity as well as musical extremity, all of this with a very own illuminated death black metal aura. Sammath Naur have upgraded their sound from a technical and yet symphonic / melodic extreme metal into a more complex blackened death metal. Still technical but allot more powerful and in the same time allot more aggressive!
Sadly, and without a doubt this is another damn underrated band, they sure have detach from today's days predictable and monotone extreme metal, the massive work expended on this both last albums prove that they are without a doubt one of the best bands in the genre, all this with a damn killer extreme sound!
"Limits were to be broken" is a record not to be missed by any extreme metal fan, a must for fans of bands like Hate, Decapitated, Behemoth, Morbid Angel, Vader, etc. or even Limbonic Art, Arcturus, Vesania, Emperor, Dimmu Borgir, Fleshgod Apocalypse etc. on their "Anhedonia" stage!
Beyond the limits you will achieve your goals and explore fields you would never thought to be real... unleash yourself and expand your own self! 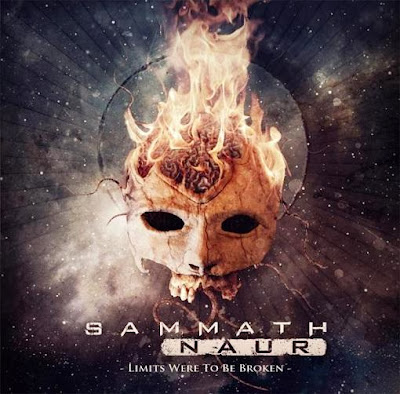 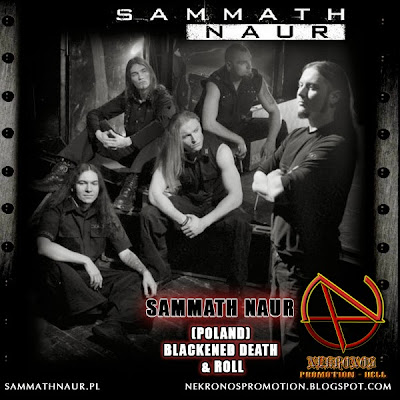 The band:
SAMMATH NAUR Polish death black metal masters have unleashed their 2 latest releases in a special 2CD package by the title of "Limits were to be broken", for those unfamiliar with this smashing extreme metal band, let me tell you a bit more about them:
Sammath Naur name for the curious ones, has been adapted from JRR Tolkien's work and means "Chambers of Fire", the only place where the "One Ring" could be destroyed! As for the band itself, it has been formed in 1999 in Poland and till now their only remaining founding member is Sigmar (guitar). Since the foundation the band has developed their sound from a melodic / symphonic death black metal into an allot more technical and dynamic form of extreme metal, combining the best elements of death and black metal and taking them to the limits. With this, the band produces their own sound and own identity, proving to be allot more than just another Polish death black metal band! This has allowed them to tour and participate on loads of concerts and festivals with bands like Hate, Vesania, Crionics, Sceptic, etc.

The new album musically and lyrically:
On "Limits were to be broken" the band presents you two different formulas of the Sammath Naur identity, on the first CD (Beyond the limits) you have the renewed and most updated sound that sure is a more aggressive, technical and dynamic form of blackened death metal, in the other hand on the second CD (Anhedonia) you have their best melodic / symphonic compositions ever built, two faces for the same outstanding band, proving that their will to upgrade and genius to create new sound is the essence of the band, always ready to surprise you with a blasting new opus with renewed and refreshed new elements taken to the limits!
While the "Beyond the limits" sound shall please fans of extremer and more technical bands such as Hate, Decapitated, Behemoth, Morbid Angel, Vader. On the other hand the "Anhedonia" sound shall please the fans of avant-garde and symphonic bands likes Limbonic Art, Arcturus, Vesania, Emperor, Dimmu Borgir, Fleshgod Apocalypse for example. In both forms the band keeps the demanding and damn top-skill elite technical sound constant, proving that the core of the band is the one who gives their solid identity and sound!
The lyrics on this release mostly done by Sigmar and Maro are mind liberating and against any human blinding religions or beliefs, beliefs that shall make you limited and lesser human! Defying lyricism, always pushing you to think and act by your own self! Damn worth reading, inspired as well as illuminated!
With "Limits were to be broken" Sammath Naur have affirmed themselves as one of the most creative and ever-growing forces deep in the Polish extreme metal scene! With this album the band has set another mark of quality, extremity, technical as well as virtuosity deep into metal music!

The band members and album production:
Just like the title of the album inspires ("Limits were to be broken"), the band members skills and talent are stretched to their limits on this opus!
Sigmar (see also Mala Herba) is the heart and soul of the band, his work (guitar, synth and lyrics) is giving the essence to Sammath Naur identity. Valeo (see also Vesania) work on both last releases is about brilliant, his delightful virtuous guitar leads and orchestrations (Anhedonia) are simply outstanding and genius! Lucass (see also GNIDA, Crionics, Thy Disease, etc.) is already a well known drummer on the Polish extreme metal scene, his dynamism and skills are way above the average allowing him to produce some of the most brilliant, demanding and elite drum work like on his whole album participation! Maro (see also Lost Soul, Mala Herba) has done the best vocal work across this dynamic release. Tas has also contributed with a smashing pounding bass work to this extreme technical album!
Lestath (see also Darzamat, Esqarial, etc) vocals and drums worked pretty well on the bands previous endeavours on a more symphonic / melodic approach, he sure has put the right dose of aggressive vocals to balance things up there! As guest vocals the band invited the well known Polish metal titan Orion (see also Behemoth, Vesania,etc.) who contributed with some vocal lines.
As for the production on both albums we have a great work done and goals achieved. Yet even the recordings done over Yacob Records Studio were damn good, on Invent Sound Studio (Beyond the Limits) the band pushed things further, deep into an absolute new level and reached "the perfect extreme metal elite sound"! I must say that the recordings over there as well as the mix and mastering for both albums done on the famous Hertz Studio (Hate, Vader, Behemoth, etc...) couldn't simply be better!

The album highlights:
Both releases contained on this "Limits were to be broken" piece are quite working as whole and revealing the best of the band but yet I would like to mention some highlights on both of them:
"Beyond the limits":
Ignited by "Limits Are to Broken" track the new sound of the band is presented at it's best. A damn outstanding and powerful track that welcomes you to a new realm of extreme metal music where limits were made to be broken! The brutally technical sound keeps on invading your ears in tracks like "The Endless Cycle" or "Ecstasy in Pain", pure musical architecture built up by death black metal geniality... damn, those solos by Valeo will surely keep your ears captive! "Grudzień" and "Król-Duch" tracks, the last sung in Polish, reveal a new and powerful formula of dynamic extreme metal crescendo, outstanding how the band unleashes such strength on those tracks! "Harm" is another great track that has given form to a video clip. Two more tracks shall catch your attention, songs like "The Sinister Manifest of Power" and "Beyond the Limits" that ends these Cd with a true epic aura, an extreme music hell unleashed in a tight and complex format, pushing music beyond its limits!
"Anhedonia":
Tracks like "Grand Liberation", "Comedy on Earth" or "The Anhedony Domain" shows the bands essence at that stage to the best, all this with a killer combo of technical melody mixed with outstanding astral symphonic orchestrations, a true delight to the ears. The outstanding solos by Valeo, the avant-garde musical structures and the ever-present orchestral-work for sure push things to a transcendental level! In the other hand tracks like "Let Them Die" or "Eleven XXIII" approach the band to today's days updated sound, allot more aggressive and brutal and lesser dependant of melodic orchestrations, in a a way this tracks are allot more straight forwards and "in-your-face"! One of my favourite tracks here is "Melody of Eleven Lives", it combines at best the most aggressive and symphonic sides of the band at this stage, simply outstanding and delightful. To finish, we have another must-listen cover bonus track, Satyricons "Mother North", simply one of the best Satyricon covers I heard so far, damn brutal!

The Epilog:
In all "Limits were to be broken" as the title inspires, presents the best work ever done by the band Sammath Naur, top skilled musicians creating top quality extreme metal. This is some of the best releases of Polish extreme metal for 2013 year. A release with an elite symphonic death black metal side and a more technical and aggressive death black metal approach on the other! This is a release not to be missed by any death black metal adept with a special taste for Poland products of quality! A black pearl in any extreme metal fan collection and a must have release if you are already a fan of the band, without a doubt this release combines the two best pieces that this band build to the date! All of this wrapped up with two bonus clips ("HARM" and "On the Altar of Mars") as well some smashing artwork build by Piotr Szafraniec (Crionics, Thy Disease,etc). Limits have surely been broken by such innovative excellence in form of extreme metal!
Unleash yourself and expand your horizons, your goals lay beyond the limits on yet unexplored fields, learn to fly and reach a world you thought not to be unreal!

Check out the "Limits were to be broken" Teaser : HERE :
http://www.youtube.com/watch?v=7Jj6LHsS2aI

Check out the videoclip for "HARM" : HERE :
http://www.youtube.com/watch?v=e53EiompCGE

Posted by NeKronos Promotion Hell at 14:03