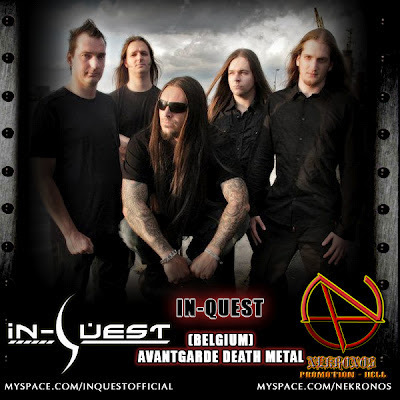 Check the band IN-QUEST. A killer Belgian band for fans of Death, Cynic, Pantera, Morbid Angel, Meshuggah and more!
Show your support and share this info if you liked the band!

The clip for "Mind over Matter" from the latest full length album "Made out of Negative Matter":
http://youtu.be/ZIsDE-eaKXc 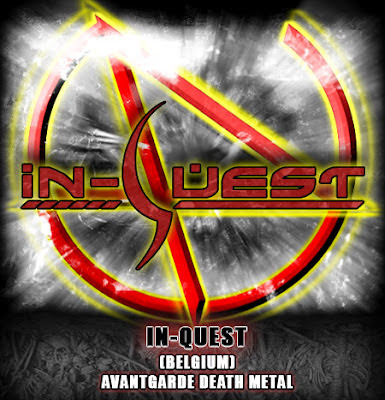 The new In-Quest album "Made Out Of Negative Matter" is a fact.
This fifth full length is the result of a 2 year spanning cooperation with Jochem J. (SplitSecondSound/Textures). Under his supervision, In-Quest constructed their own studio to compose, record and arrange their new work. The result was a highly creative environment where songs would grow whilst being recorded. Eventually the final mix and master were also handled by Jochem himself at SplitSecondSound.

The new album daringly redefines In-Quest's sonic foundations and introduces a more melodic, organic and massively layered approach to songwriting. It could be described as a continuation of technical 'Epileptic' enthusiasm combined with the disctinct, emotional 'Comatose' fingerprint. Add to this the originality of the first 2 albums rediscovered, the cold 'Pyroclasm' brutality reinforced with a fresh, artistic & open-minded avantgarde attitude.

Vengeance, hatred and existential crises are the lyrical key themes that confront the listener with the phenomenon 'Human' anno 2010. As such, "Made Out Of Negative Matter" is about mankind, the most unfaithful breed of animals.To translate this concept into imagery, In-Quest re-approached Dennis S. (DamnEngine/2004 'Epileptic'). Futuristic and cold, the album cover shows a metaphorical black hole, sucking up all matter and feeding on it.

"Of all that is written, I love only what one has written with his own blood" - F. Nietzsche

Posted by NeKronos Promotion Hell at 00:48