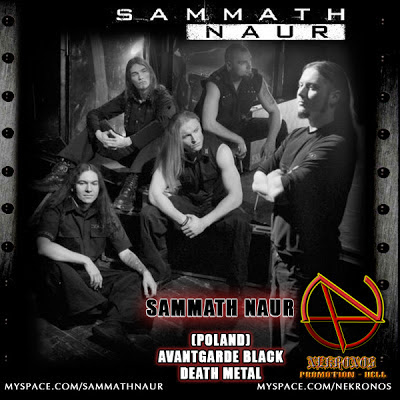 NeKronos Promotion is Proud to present the band SAMMATH NAUR a killer and skilled band from Polish lands, for fans of Behemoth, Emperor, HATE, Morbid Angel, Vader, Trauma and allot more. Features Valeo of Vesania and Lucasz one of the best Polish drummers of this days!
Show support and share this info with all your Metal friends!

The official clip for the track "HARM":
http://youtu.be/e53EiompCGE 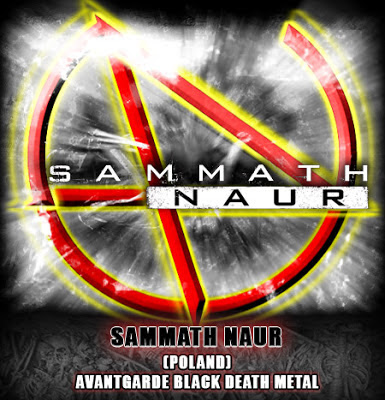 Sammath Naur was formed in 1999 by Uzurpator - vocals, Saturnus - guitars, Sigmar - guitars and Lestath - drums. The name of the band has been adapted from JRR Tolkien's works and means 'Chambers of Fire', the only place where the One Ring could be destroyed.

The band recorded its first 6 track demo, "Through the Mountains of Mordor, " that same year. The music on this demo was very raw and simple. It was reminiscent of Immortal and Emperor's early works. Due to the poor sound quality, the demo has never been released.

In 2001 Sammath Naur greeted its new guitarist Tempter, keyboard player Demetrius and bassist Morgoth. Saturnus decided to change his role from a guitar player to a vocalist, thereby replacing Uzurpator. In this new lineup, the band started working on new material and getting ready for a recording session. The result was a second demo, "The Wall of Sleep". It was self-funded and released in 2001. It contained 6 new compositions, somewhat faster and more mature, in which electric organs played a more prominent role. "The "On the Altar of Mars" music video was attached to this release. The author of the music video was Patryk Chyla. It won second prize at the Berlin music video festival in 2002. It was Sammath Naur's first major success. Many positive reviews were written after the release of The Wall of Sleep. The material has been intensively promoted at concerts throughout Poland with bands like Esqarial and Lost Soul.

Work on a new release was started in 2003. The process of creating and recording new material took a long time. The band was troubled by personal problems throughout the whole time. Saturnus left at the very beginning of the recording session. Soon after the bass tracks were recorded, Morgoth went in Saturnus' tracks, leaving the band. Work on the third release was completed in 2004, unfortunately without Tempter, who was replaced by Valeo (aka. V), and with a brand new vocalist, Levan. The new album was titled "The Forever War". It consisted, once again, of 6 tracks, however this time a certain innovation was introduced. The Forever War was a concept album. The tracks all made up a consistent whole. They combined various music styles, intertwining in a natural way, such as black/death metal, soundtrack scores and symphonic music. The material was a sure step forward in the development of the band, although the real breakthrough was yet to come. In this new lineup, Sammath Naur's members started promoting their new material on numerous concerts. Having been invited by Effect Murder and Deception, they set out on their first tour of Poland. An intensive search for a record company started at about that time. The band eventually decided to sign a contract with Redrum666 Records. The cooperation, however, proved ill-fated. The premiere of The Forever War kept being postponed. The album wasn't released.

By the end of 2004 the band decided to record their first professional album. Composing music this time didn't take so long. It was completed on the break of June-July 2004. Sammath Naur was joined by bassist Tas at that time. The recording session started in February 2005 and was planned out into 3 stages. During its course, important changes in the lineup occurred. Keyboard player Demetrius, who took part in the recording of the new material, left the band. His absence forced guitarist Valeo (aka V) to record the keyboard parts on the album. Hitherto vocalist Levan was removed from the band during recording. As a result of this, most of the vocal parts were arranged and performed by drummer Lestath. There was one more new musician, Revisque - composer and producer of game soundtracks, with whom the band started to co-operate already by the end of the recording session. That's why only one of his compositions, "Grand Space Opera, " can be found on the new CD.

Everything was completed by June 2005. Soon afterwards, Polish Empire Records grew interested in the material from SN, thanks to whom the album "Self Proclaimed Existence" was released in December 2005 in conjunction with THRASH'EM ALL magazine. The CD comprised of 11 tracks. The music was faster and far more aggressive - it's really didn't sound anything like the first two demos. The style of creating music by merging various musical genres, first attempted in The Forever War, was explored more deeply on this album. The assimilation of such diverse styles as black/death metal, classical rock, new age, film scores, symphonic and choir music resulted in a unique creation that couldn't be categorized, stereotyped or pigeon-holed.

Thanks to this album, the true potential of Sammath Naur's musicians has been noticed very quickly by other artists. Presently, Valeo plays with Vesania and Rootwater and Lestath has been a drummer of Esqarial and Darzamat.

Posted by NeKronos Promotion Hell at 01:08