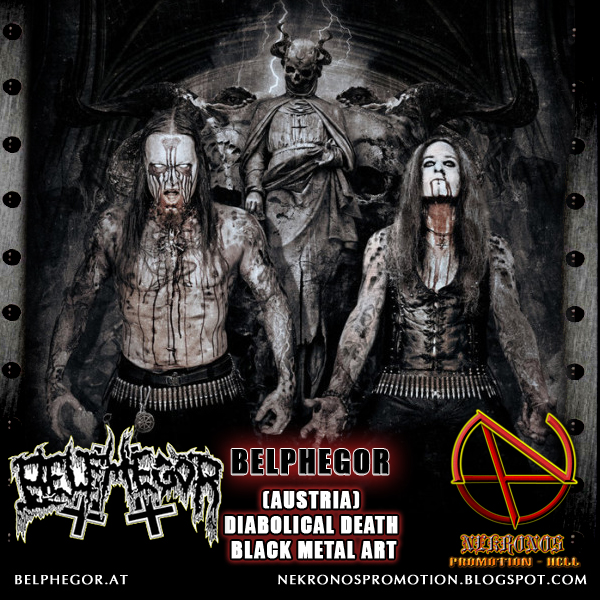 NeKronos Promotion is Proud to present the band of the NeKroWeek, they are BELPHEGOR (Diabolical Death Black Metal Art), one of the most extreme brutal bands ever to come from Austrian lands. One of the most respected bands in their genre and a reference of excellence in extreme metal itself!
Show your support and share this info to all your metal brotherhood if you like what you have heard!

The Lyric Video for "Baphomet" from the new album "TOTENRITUAL"
https://youtu.be/ugX0T2yi20s 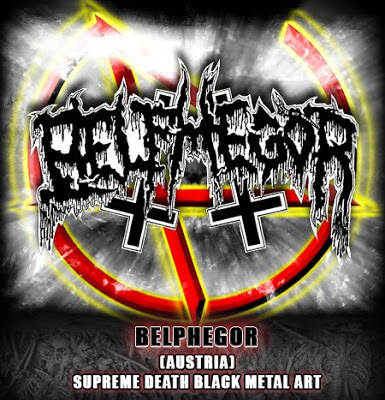 BELPHEGOR emerges as one of the most extreme line ups to ever come out of the death black metal scene. The band members themselves describe their hellride as "Supreme Death/ Black Metal Art”

1993: The now legendary demo on Maxi Cd format, BLOODBATH IN PARADISE, is circulated within the underground and earns BELPHEGOR the reputation of an unrepentant, blasting war machine. 1995: The first studio album, THE LAST SUPPER, is released on Lethal Records and is a welcomed collection of infernal hymns for their growing fan base. Following their own path of sin and befitting their ever-evolving anti-religious, anti-life attitude, BELPHEGOR’s logo gets revamped to incorporate two inverted crosses completely surrounded by blood representing the slaughter of Christians and martyrs.
1997: Last Episode Records releases BLUTSABBATH. BELPHEGOR’s sinister reputation continues to gain momentum.

2000: Stagnation means death! The band spreads their disease once again via NECRODAEMON TERRORSATHAN, logging yet another volume of blasphemy added to The Vatican Library. 2002: BELPHEGOR celebrates their 10th anniversary by capturing a live set with songs played even faster than their original studio recordings on INFERNAL LIVE ORGASM
(released on their own label, Phallelujah Productions).

2003: Produced at Mastersound Studios, BELPHEGOR cram their high-speed murderous brutality into the 8-track release of LUCIFER INCESTUS, and then tour again throughout Europe. 2005: The band opts to once again to work with Alex Krull at Mastersound to create the morbid GOATREICH - FLESHCULT, and later shredding Europe with the infamous X-Mass Festival and an eighteen dates headliner tour. “We don’t give a fuck about anything and don’t let anyone talk us into doing anything. Only the music counts!”

Produced, mixed, and mastered by Andy Classen at Stage One Studio in Kassel, Germany, and featuring artwork by Seth Siro Anton PESTAPOKALYPSE VI is, on the one hand, a concept album based on The Devil, Pestilence, and The Apocalypse, and on the other, a lesson in infernology. Incorporating unconventional harmonies with dynamic execution and monumentally aggressive vocal work, its multi-language approach (the German verses in “Bluhtsturm Erotika” are taken from the works of Marquis de Sade & Goethe; “Sanctus Perversum” defiles the church’s monopoly on Latin) accurately represents the infernal musical landscape BELPHEGOR comfortably inhabits.

Accept it: our world is necessarily haunted by evil, and when the armies of the dead return with their pestilence to annihilate the living, there will be no better guides while traveling down the fiery road to the endless abyss of Hell than BELPHEGOR.

With their seventh Album, suitably titled BONDAGE GOAT ZOMBIE, the Death/ Black Metal institution crushes all their previous releases! A real massacre of pounding Death Metal and majestic, hyper fast Black Metal spread out over nine killer songs full of diabolical possession, and pure darkness! BONDAGE GOAT ZOMBIE is their most mature effort up to day, this time BELPHEGOR have managed to melt ultra blastbeats and heaviness to one union.

The Fleischwerk was once again recorded in three sessions form November 2007 to January 2008 with Andy Classen in the famous Stage One Studios in Kassel/Germany – guarantying a smashing and powerful production.
The concept of the album is inspired by the infamous Marquis De Sade (1740 – 1814), giving the lyrics of the album a blessed touch of Evil. As on the last album, the vocals are held in English, German and Latin.
BONDAGE GOAT ZOMBIE is once again a lesson in violence and a true offering when it comes to crushing Metal with the extra punch in the face.

Posted by NeKronos Promotion Hell at 01:16