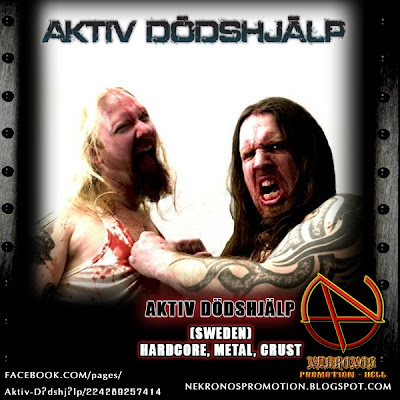 NeKronos Promotion is proud to present the first band of the NeKroWeek, they are AKTIV DÖDSHJÄLP (Hardcore Metal Crust), this is a kick ass band featuring members from Scar Symmetry, Facebreaker, ex-Devian, ex-Dark Funeral etc. A great Swedish band that combines all the best elements of Metal, Crust and Hardcore!
Show your support and share this info to all your metal brotherhood if you like what you have heard! 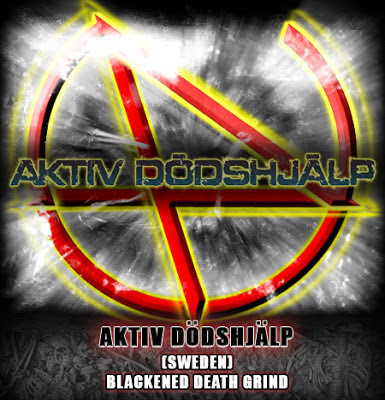 Aktiv Dödshjälp was formed in 2004 by Tomas Nilsson who recently had been introduced to Swedish crust sound. Being overthrown by this new world of extreme music he felt an urge to create a band to explore this new dimension in music.

After several demos, complication albums and a split 7” had been released the majority of the band decided to quite due to the lack of interest, this was in 2006.
Tomas soon recruited new members to the band and wrote the band’s first fullenght album, 4:48 which saw the light of day in the middle of 2007. On this album he focused on mixing crustcore a lot with black metal and death metal elements.

In 2009 Tomas recruited Roberth Karlsson (also known from his work in Scar Symmetry and Facebreaker) to sing on the forthcoming Aktiv Dödshjälp album. By this time Tomas felt that he had explored most of the crustcore sound and started to experiment a lot more with hardcore elements in the songs. The previous tours done with Devian had also affected Tomas way in writing songs.

In 2010 the second fullenght album, Men allting har ett slut, was released and soon got a lot of attentions in Sweden.

Posted by NeKronos Promotion Hell at 01:33